Long Hidden: Speculative Fiction From the Margins of History, edited by Rose Fox and Daniel José Older, and published by Crossed Genres Publications, will be released in May.

I'm thrilled to be included in this table of contents:

“The Oud” by Thoraiya Dyer
The Shouf, Ottoman Empire, 1633
illustrated by Janet Chui

“Free Jim’s Mine” by Tananarive Due
Georgia, U.S.A., 1838
illustrated by Alice Meichi Li

“Across the Seam” by Sunny Moraine
Pennsylvania, U.S.A., 1897
illustrated by Eric Orchard

“Each Part Without Mercy” by Meg Jayanth
Madras, India, 1746
illustrated by Kaysha Siemens

“The Colts” by Benjamin Parzybok
Hungary, 1514
illustrated by Sasha Gallagher

“The Heart and the Feather” by Christina Lynch
Austria, 1589
illustrated by Janet Chui

“A Score of Roses” by Troy L. Wiggins
Memphis, U.S.A., circa 1968
illustrated by Eric Orchard

“Neither Witch Nor Fairy” by Nghi Vo
Belfast, Ireland, 1895
illustrated by Kaysha Siemens

“There Will Be One Vacant Chair” by Sarah Pinsker
Ohio, U.S.A, 1862
illustrated by Kaysha Siemens

“The Dance of the White Demons” by Sabrina Vourvoulias
Guatemala, 1524
illustrated by GMB Chomichuk
Posted by Unknown at 9:17 AM 1 comment:

Eligible for awards: The Latina conundrum 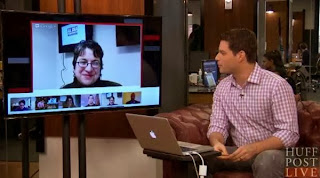 I haven't been a published SFF writer that long (my first sale was in 2010), but I've been a journalist forever and January and February is when I start thinking about awards. Because it is the season to put together submissions (in journo-world) and to remind those who put together award ballots that you have work that is eligible (in SFF-world).

The stakes are higher in journo-world, but easier too. I'm an editor, and much of what I'll be considering for submission is other people's work: reporters, designers, photographers, videographers. I'll have two sets of awards criteria and news conventions to juggle as I make my decision about submissions — English-language news media and Spanish-language — from the thousands of pieces we produce at AL DÍA in the span of a year. I'll ask each member of the editorial team to remind me of their best work, and then, when it comes to the young Latinas on the team, will have to push. 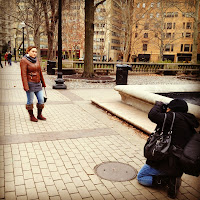 Because nearly every Latina has had it drummed into her — early and often — that we must be humble and self-effacing. Particularly if we are talented. Even more particularly if we are talented and working in a profession like journalism where advancement comes much more readily if you are a man (only 30 percent of supervisory positions in newsrooms are held by women, according to the 2013 ASNE report). 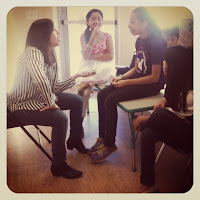 You might be tempted to think that this is no longer the case with the younger generation of Latinas, but in my experience no matter how bright, well-educated and competent my younger colleagues are, they still shy away from speaking with obvious pride about their work. More often, they demur and minimize accomplishment. In their worst moments, they defer to their male counterparts' opinions about deficit and internalize it as self-censoring truth.

Part of my challenge, as the older Latina journo in a supervisory position, is to actively discourage this cloak of modesty and deference. 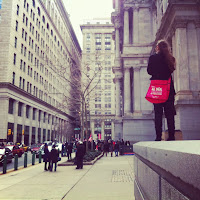 To encourage them to forsake their reputations as nice, quiet, unassuming members of the newsroom and embrace much riskier qualities: authenticity, ambition, audacity.

Because they possess all of those qualities, they just need to own them.

Not that it is easy.

In fact, while I've long been an unapologetically assertive and self-assured journo (I've been called loud, rude and a pain in the ass more than once, usually by discomfited male colleagues), I am more tentative in the SFF writing sphere. No, I'm not a shrinking violet (my formidable mama didn't raise any of those) but I do find myself thinking twice before submitting my stories to venues with daunting reputations; and thrice before adding my titles to the lists of award-eligible stories.

Damn cloak, so tempting to hide under it.

But if I ask the young women on AL DIA's editorial team for audacity, I can offer no less, and as it happens, it's "award eligibility reminder" time for the Hugos and Nebulas. So here is my short list of eligible work:

• UPDATE: My short story "Ember" which appeared in the anthology Menial: Skilled Labor in Science Fiction from Crossed Genres.

• My short story "Collateral Memory" which appeared in Strange Horizons June 10, 2013  is eligible in the short story category. Read it, it's a good story. I guarantee it's a voice and narrative unlike any other. If you can't (or don't want to) nominate it, leave a comment on it anyway. Truth be told, there is little I love more than reading people's responses to my work.

• That publication in Strange Horizons also makes me eligible for the John W. Campbell Award, which is given to the best new science fiction or fantasy writer whose first work in a qualifying market was published in 2012 or 2013.  Neither my novel, INK, nor "La Gorda and the City of Silver," (nor any other stories I've published) make me eligible, but "Collateral Memory" does. And I won't lie, it would be cool to be nominated. So if you can ... think about it.

Ultimately it doesn't matter whether any of the work I submit for my editorial team at AL DIA wins any awards. Nor does it matter if I am nominated, or ever win, an SFF award. What matters, mijas, is that we believe we can. And that we dare to say so, nice and loud.