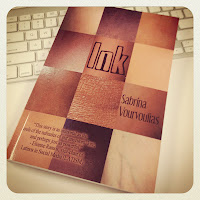 
Reviews:
Publishers Weekly: "Readers will be moved by this call for justice in the future and the present."  Click to read in full: http://www.publishersweekly.com/978-0-615-65781-3
Reforma: The National Association to Promote Library and Information Services to Latinos and the Spanish Speaking: "A chilling tale of American Apartheid, and the power of love, myth and community." Click to read in full: http://www.reforma.org/article_content.asp?edition=2&section=2&article=231


Escape Pod: "Vourvoulias' writing is fluid and easy to read." Click to read in full: http://escapepod.org/2012/08/27/book-review-ink-by-sabrina-vourvoulias/
Elianne Ramos, vice-chair of Latinos in Social Media (LATISM): "In Ink, Vourvoulias masterfully weaves an increasingly complex parallel universe at once fantastical and eerily familiar." Click to read in full: http://inknovel.com/reviews/
There are also early reader reviews posted to Ink's listing on Goodreads and Librarything.
Other news:
Join me at the Comadres and Compadres Writers Conference, Saturday, Oct. 6 at Medgar Evers College in Brooklyn, NY. I will be part of a panel on genre fiction. For more information: http://www.lascomadres.org/lco/lco-eng/events/2012/NYCWC.html
I've got a Latino literature-Hispanic Heritage Month guest blog post over at the Tejana Made blog: http://tejanamade.wordpress.com/2012/09/26/guest-post-by-sabrina-vourvoulias-author-of-ink-hispanic-heritage-month/

For review copies please contact publicity(at)crossedgenres(dot)com
Ink will be available on Amazon and from Barnes and Noble online.

9/11: The commonality of loss and grief

The Spanish-language version of this column appeared originally in Al Día Café.

I remember exactly how I spent Sept. 11, 2001: glued to the television and to the telephone, hoping to get through to my brothers in New York City — who, I hoped, hadn’t been on the subway from Brooklyn to New York City, or on some errand that took them downtown that morning when the twin towers came down.

It’d be 36 hours before I learned that my brothers were safe and well, despite the fact that one had, indeed, been in the subway and evacuated onto the street close to the towers. My great fortune on that day 11 years ago is that I didn’t lose my loved ones and therefore my heart. Too many cannot say the same.

As it should be, we mark the anniversary of 9/11 with the stories of heroism, sacrifice, kindness and forbearance of the people caught in, or rushing to respond to, the tragedy. We swear to never forget them — or the shared sense of loss in seeing lives senselessly cut short.

But, I feel we’re missing something important.

As much as I remember the shock of everything that happened that day, I remember even better the images of the impromptu memorials set up in other nations. Not governmental entities, just ordinary people sharing our loss and our heartbreaking vigil for the dead and missing.

I had never before seen such an visible expression of solidarity with the grieving.

I remember, very clearly, being incredibly moved by these expressions and at the same time, feeling ashamed. People throughout the world grieve the loss of their loved ones from violence, terrorism and wars — declared and undeclared — daily, and unmarked by me. Genocides of hundreds of thousands have taken place in my lifetime without my lighting a single candle in vigil.

Were the people lighting candles on the streets of  Azerbaijan, Japan, Greenland, Bulgaria and Tajiskitan; leaving flowers and condolence notes in front of the U.S. Embassy in Beijing; and waiting for three hours in line in Dublin to sign a book of condolences, simply better people than me? Quite possibly. But it also pointed to the not-so-admirable trait of Americans to not pay much attention to the rest of the world, and when we do, to feel like we stand apart from (and, often, above) everyone else.

Despite best intentions, the way we mark our 9/11 anniversaries tends to exacerbate the isolation that our “American exceptionalism” engenders. We make ourselves hermetic, gather tight round this tragedy that we believe none but an American can understand, even make our national memory of it an occasion for political posturing and veiled jingoism.

I don’t suggest that we not memorialize the losses of 9/11, but that we recognize them as part of an unbearably large number of similar tragedies that all human beings suffer.

I suggest that we try the equivalent of what people of other nations did after 9/11 — light candles not only for ourselves, but for others. Because, to quote journalist and activist Dorothy Day, “We have all known the long loneliness, and we have found that the answer is community.”
Posted by Unknown at 5:42 PM No comments: