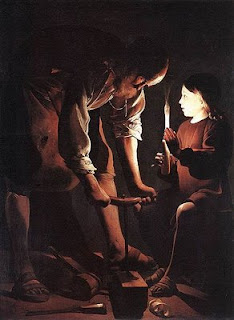 There are times blogging comes easily. Some others, not so much.

I’m struggling now with whether I want to write about proposed legislation in California. It proposes issuing different birth certificates to the U.S.-born infants of undocumented immigrants than to any other U.S.-born infants. It would thus become material proof of “second class” status and would sweep away the 14th Amendment’s jus solis category of citizenship for those the state deems “undesirable” [http://www.northcountytimes.com/articles/2009/04/15/news/sandiego/z3a7cb4466b4507ce882575970077d470.txt].

But no, as much as the proposal alarms me – and should alarm any child or grandchild or great-grandchild of immigrants whose citizenship was granted by virtue of having been born on U. S. soil – I just don’t want to delve into what such a proposal means. What it says about the type of nation we are contemplating becoming.

Neither do I want to examine the fact that anti-immigrant groups such as FAIR [http://www.splcenter.org/intel/nativist_fair.jsp and http://www.splcenter.org/intel/nativist_lobby.jsp] have responded to the President’s readiness to begin addressing immigration reform by pledging renewed and increased talk radio and internet attacks [http://www.sun-sentinel.com/news/local/broward/sfl-immigration-lobbying-041509,0,446373.story]. Or the fact that the nativist group, according to information on its web site, has been called to testify before Congress on immigration proposals more than any other organization in America.

I don’t even want to write about the illuminating but depressing Catholic News Service article about the Pew Center’s recently released “Portrait of Unauthorized Immigrants” [http://www.catholicnews.com/data/stories/cns/0901738.htm] or any of the excellent articles on immigration I read daily in El Diario/La Prensa [http://www.impre.com/eldiariony/].

Instead, I’m tempted to blog Catholic.

It is not something I do often, though faith underpins every entry about immigration and torture and sanctuary and all the personal stories I’ve ever posted here. It’s just that – it may as well be said upfront – I’m hardly the poster child for Catholicism. I was away from the Church almost as long as I’ve been in it, and am no more capable of deep theological thought than your average bear. Forget apologetics or eschatology or whether I prefer Aquinas or Augustine (though an amusing Facebook quiz tells me I’m in Aquinas’ camp) I want to write about a far more mundane aspect of being Catholic.

May 1 is the feast of St. Joseph the Worker.

This memorial looks not at the saint’s exalted moments of angelic guidance, but at his day-to-day labor as a carpenter and the tradition that, as Jesus’ foster father, he taught Him his trade.

The memorial acknowledges the dignity of work – no matter that it be accomplished with sweat and physical exertion or without formal education – and of the dignity of the human beings performing that work.

It is good to be reminded of this. Our society doesn’t much value certain types of labor, or see artistry in what it considers ordinary. We hardly notice those around us who keep the roads paved, the fields yielding or the shelves stocked. We probably wouldn’t have noticed this simple village carpenter either.

Through this memorial, and in her papal encyclical about the dignity of work, the Catholic Church honors what many of us forget – that nations would founder without laborers, and that they are due every bit as much respect as the white-collar workers who make it onto the pages of Fortune magazine.

A column that will appear on the bilingual page of the Catholic Standard & Times’ April 23 edition [www.cst-phl.com] talks about St. Joseph the Worker and also notes that May 1 marks the national “Day without an Immigrant.” Though the rallies associated with the day have dwindled in recent years, at their peak hundreds of thousands of people gathered in a visible reminder of how many immigrants labor side by side with us; how many of them pray for justice and redemption side by side with us as well.

The author of the column in the CS&T reminds us that in addition to a laborer, St. Joseph was an also immigrant, seeking refuge with his family in lands other than his own. It fits so perfectly, don’t you think? Work and pray. That is what we do together.

On May 1, let’s promise to notice those who labor around us. Let’s notice not the color of their skin or the quality of their language or the status of their documents, but the work of their hands. To paraphrase a U2 song, those are the hands that build America.

Painting of St. Joseph by Georges de La Tour at the top of this blog is from Wikimedia commons' public domain images.

Not news to us

An article on racial profiling of Latinos appeared in the April 15 online edition of the New York Times:

Many police officers in New Jersey are misusing a 2007 directive by the state’s attorney general by questioning the immigration status of Latino drivers, passengers, pedestrians and even crime victims, reporting them to federal immigration authorities and jailing some for days without criminal charges, according to a Seton Hall Law School study.

“The data suggests a disturbing trend towards racial profiling by the New Jersey police,” said Bassina Farbenblum, a lawyer with the law school’s Center for Social Justice, which gathered details of 68 cases over the past nine months in which people were questioned about their immigration status for no apparent reason, or after minor infractions, like rolling through a stop sign. None involved drunken driving or the use of false documents.

Yesterday, the Southern Tier city of Binghamton, N.Y. literally shot into the news. I followed the tragedy as it unfolded – 14 people dead at a center that provides services for immigrants and refugees; the presumed shooter also an immigrant, also dead.

Immediately the Binghamton Press & Sun-Bulletin’s online news site, pressconnects.com, was flooded with comments from readers: some hate filled, others keyed to retaining focus on the tragedy rather than anti-immigrant rhetoric. (See editorial about this in El Diario/La Prensa: http://www.impre.com/eldiariony/opinion/2009/4/4/tragedy-in-binghamton-117746-1.html.)

We don’t know why this happened, and no matter how much more coverage the story gets, we never will. The heart can be a dark place, and it can fill as readily with despair as it does with hope. I write a lot in this blog about the hopes of immigrants – how this virtue drives the desire to emigrate in the first place, and how it fills people after immigration – even when the new living situation seems almost as difficult as the one left behind.

But hope can die hard, in ugly ways.

Already the news reports are saying that the presumed shooter had recently lost his job. For Southern Tier cities like Binghamton – much of Central New York State really – the current economic crisis is no new experience. The region has been struggling economically for decades. Once-thriving corporations like Endicott-Johnson in Binghamton and Proctor and Gamble in Norwich filled cities and towns in this part of the world with architecturally splendid houses and buildings during prosperous times – and then, as they closed or abandoned the area, left an unfillable void and a hardscrabble reality. The family farms that also contributed to the economy of the region are artifacts of a bygone era – though some hang on, with the stubborn, admirable tenacity that is a hallmark of people there.

If it seems to you that I write about this region of New York with love, it is because I do love it. I have led a peripatetic life – but came close to finding a true home during the 14 years I lived in the Central New York towns of Earlville and Hamilton. It is a region filled with down-to-earth people, forthcoming and unpretentious, who will, quite literally, open up their wallets and give you their last 10- or 20-dollar bill if they believe you are in need.

They are, also, far more likely than people in more worldly regions to be upfront and unsubtle about their prejudices. I’ve only ever been called “spic” (to my face anyway) in Central New York. I thought about that a lot as I kept tabs on the Binghamton story yesterday. Could it be that the shooter had heard that sort of casual derogation to the point where he despaired of ever being considered a human being first – and an individual rather than a walking representation of ethnic stereotype? It is certainly possible, though Binghamton is more ethnically diverse than other towns along that stretch of Route 12, and by all accounts, fairly welcoming of the immigrants who have settled there.

It would be a mistake, though, to dismiss this as a tragedy tied solely to its region, as some of the comments posted to the Press & Sun-Bulletin web site try to do. Even in more heterogeneous communities, it is hard to escape the derogation all immigrants feel at this particular moment in U. S. history. Public figures such as Sen. Tom Tancredo, Pat Buchanan, Lou Dobbs, Sheriff Joe Arpaio – and our own Joey Vento here in Philadelphia – have so vilified immigrants and stoked xenophobia that it is impossible to be an immigrant and not feel criminalized. Or devoid of hope.

And still, there they were – the victims of this shooting – studying English as a second language and learning the civics and history necessary to pass their citizenship exams. They were the very emblem of immigrant hope.

As days pass, I count on learning more about them – so that their faces, their lives, are what I come to remember.

Economic catastrophe, the cloud of fear and persecution immigrants live under, mental derangement – ensuing reports will no doubt bring more details about the shooter and his possible motives and circumstances to light.

None of which will justify his actions or make them any easier to understand.

But perhaps understanding isn’t necessary. Just a promise. That we will not let hope die in ourselves, in those around us, or upstate from us. That when we know hope is dying, we will reach into our wallets or past our prejudices, and extend a very real hand.

In charity. In love. In the promise of hope resurrected.
Posted by Unknown at 10:52 AM 4 comments: