Temple is a critical safety-net service provider for the Port Richmond, Kensington, Bridesburg, Juniata and Fishtown communities in Philadelphia.

Temple receives special "Enhanced Government Support" from the state, funds that most other hospitals do not receive, so they can perform their role as the safety net hospital for poor and under-served neighborhoods in Philadelphia. According to Temple's own financial statements, TUHS has received more than $120,000,000 in these funds over the past five years; more than $27,000,000 of this amount was specifically designated for Northeastern hospital.

Join with nurses, doctors, community and political leaders at a candlelight vigil to protest Temple's plans to eliminate vital services at Northeastern on Monday, Dec. 22 from 6:15 to 8 p.m. The vigil will be held at Northeastern Hospital, corner of Allegheny Ave. and Tulip Streets, in Port Richmond.
Posted by Unknown at 11:05 PM No comments:

Hope is the thing with feathers 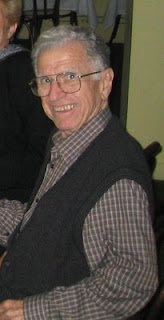 “You must have been so scared when you were kidnapped.”

It is a few months before my father’s death in 2004, and I’m riding home with him from an appointment with his oncologist. He is driving because he still can – and because it is one of the few routines he has been able to retain from his pre-cancer days. No matter that all of the family actually likes driving more than he does, it is a way of taking care of us so ingrained that wresting the steering wheel from him would be viewed as an act of high treason.

He doesn’t answer me immediately, concentrates on guiding the hulking Land Rover through the twisty Chester County back roads on which he’s chosen to drive home. This is another idiosyncrasy of my father’s – never choose the easier road, go for the one that requires attention to navigate.

“Scared? No,” he finally answers. “Not exactly.”

He rarely talked about the experience. We lived in Guatemala when it happened. He was driving home from work one afternoon when three cars boxed his in – you’ve seen the maneuver in movies. The men dragged him out of his car, hooded him, shoved him to the floor of one of their cars and drove around to disorient him before taking him to a room. There, they alternately abandoned him to hooded isolation, or harangued him with the details of my mother’s whereabouts, and ours, and how easily we, too, could be where he was.

In those days in Guatemala we lived on tenterhooks – no family got through without some brush with terror. Cars were pulled over, houses were forcibly entered, schools and workplaces were raided. Neighbors denounced one another, and people were picked up for interrogation on the slightest suspicion of malfeasance, or misfeasance, or nonfeasance. Torture, disappearances, assassinations and all manner of the collateral damages associated with an undeclared war were commonplace.

Kidnappings funded arms purchases, and despite ransoms paid, most of the kidnapped were never seen again. Or, their bodies turned up much later.

So how could my father not be soaked in fear, not be paralyzed by the impossibility of his circumstance?

“I was too busy for fear,” he tells me as we traverse the bucolic Pennsylvania landscape where he found a home a few years after his kidnapping. “I had to figure out how to stay alive. I had to convince them to let me go, so I could get back to you kids and your Mami. To make sure you were safe.”

I look over at my dad that day in 2004, and see a man much diminished by the ravages of chemotherapy and radiation. He had always been too short to cut an imposing figure, but he had the presence that comes from years of obligations met, of words held as bond, of a fire banked so deep that no circumstance – no matter how dreadful – could extinguish it.

“Don’t you hate the people who put you through that?”’ I ask him.

Years after we moved to the United States, my dad met the father of one of my brother’s friends. The man – roughly my dad’s age – had been detained by Pinochet’s henchmen after Allende was overthrown in Chile. He was an impressive person – a man of deep intellect and erudition. His twisted hands and wrists were the result of torture. He conversed quietly about his experience – about the grotesque things human beings are willing to do to each other in the name of politics,or for fear of what that other person represents.

My dad wasn’t a man of many words – so he had to be prompted to tell his own story. He never described it as a form of torture – it hadn’t left a physical trace on his body after all – but it was clear to all of us listening that torture, indeed, was what it had been.

Listening to both of them talking that day, I felt a little pity for their captors. (Okay, not much pity, but still, some.) They had sought, by inhuman treatment, to make these men less than human. To make their lives unlivable. To make them forget to hope.

“Hope is the thing with feathers,” American poet Emily Dickinson wrote, “That perches in the soul/And sings the tune without the words/And never stops at all.”

As much as I miss him, I am grateful my father didn’t live to see the country he loved embroiled in the sordidness of Abu Ghraib, Guantanamo or the debate about whether waterboarding truly qualifies as torture. I’m relieved he wasn’t alive for the revelations about extraordinary rendition, nor to see the Patriot Act enacted.

Mostly, I’m glad he – a proud U.S. citizen – didn’t live to see the fear we are visiting on undocumented immigrants in this country. It would have sounded alarmingly familiar: Cars pulled over at random (http://www.chron.com/disp/story.mpl/nation/4522941.html). Workplaces raided (http://www.businessweek.com/bwdaily/dnflash/content/aug2008/db20080819_105143.htm?chan=top+news_top+news+index_dialogue+with+readers). Neighbors denouncing each other (http://www.indypressny.org/article.php3?ArticleID=3210 and http://www.usatoday.com/money/economy/2008-11-16-1533425472_x.htm). People picked up for interrogation on the slightest provocation (http://www.mcclatchydc.com/227/story/25392.html).

If you are recoiling at the analogy, you are not alone. So did I the first time I heard it drawn for me by a priest friend who works with the undocumented. Even more, his analogy for the way we treat and deport the undocumented uses the word torture.

But then I think back on my father’s experience and I see troubling parallels. He was plucked suddenly from his life. He was taken somewhere he didn’t know by people who held power over him. He was isolated. His family was threatened with the same treatment. Read my blog post of Oct. 23, “Disappeared in Philadelphia,” and you’ll see that Beto’s experience is not far removed from my father’s.

A number of people with voices in the immigration debate have claimed that whatever treatment undocumented immigrants get it is no more than what they deserve. That they’ve broken laws. That they negatively impact the economy. Even, as Pat Buchanan says in his book “State of Emergency: The Third World Invasion and Conquest of America,” that they are threatening the very nature and ideals of the nation.

The same arguments were made in Chile under Pinochet. And in Guatemala during its slow slide into genocide. Thankfully, both those countries have since come out of their long, fearful darkness.

We, on the other hand, stand poised on the edge of a feather.
Posted by Unknown at 8:25 AM 6 comments:

Millions of people throughout the are celebrating the feast day of Our Lady of Guadalupe today. Catholics in Philly are no exception. Join Cardinal Justin Rigali for the celebration of this feast tonight at 7:30 p.m. at St. Thomas Aquinas Church on 17th and Morris St. in Philadelphia.

(La Morenita carried in the procession preceding the Hispanic Heritage Mass, 2007, Cathedral Basilica of SS. Peter and Paul, Philadelphia. Photo by Sarah Webb for the CS&T) 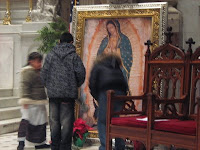 (La Morenita at La Milagrosa Chapel on Spring Garden St. in Philadelphia. Photo by Sarah Webb for the CS&T)
Posted by Unknown at 2:44 PM 1 comment:

A day in the life 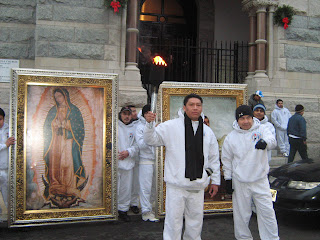 Even better, check it out on El Diario's smart edition, with great layout and nice photos (the link to El Diario/La Prensa's smart edition is always at the bottom of this blog).

One caveat: The article is in Spanish. Good thing Joey Vento, Geno's Steak owner and Philly's unrepentant monoglot, isn't one of my readers.

Or, you can wait for Thursday, and check out two of Carmen Alarcon's photos of the Guadalupe torch at Philadelphia's St. Peter the Apostle in the Catholic Standard & Times (Thank you, El Diario, for reprint permission) with captions in English. 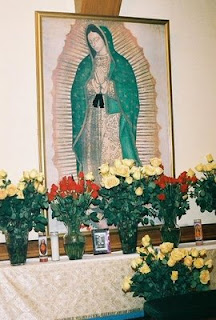 A torch lit at the Basilica of Our Lady of Guadalupe in on Oct. 5 – a symbol of hope and faith, and a reminder of the human dignity of the peoples on both sides of the border – carried by runners from Mexico City to New York City, will make a stop in this weekend.

Sometime between 5 and 6 p.m. on Saturday, Dec. 6 the torch, carried by runners representing the migrant community, will arrive at St. Peter the at and . Sunday morning, runners will carry it to its next stop – , – ultimately to arrive in on Dec. 12 the Feast Day of Our Lady of Guadalupe.

Also, on the Philadelphia Catholic breaking news front, it is semi-, quasi-, just-about official that the Cathedral Basilica of SS. Peter and Paul – ’s mother church – will be installing an image of Our Lady of Guadalupe.

Apparently, the Mexican community of St. Thomas Aquinas Parish wrote a letter to Cardinal Justin Rigali last year requesting that he consider installing an image of La Morenita in the Cathedral given the large number of Latino Catholics in the Archdiocese….at this year’s Day of Sanctification for priests, Nov. 24, the Cardinal announced it is in the works.

Posted by Unknown at 4:51 PM No comments:

Blue for the folks 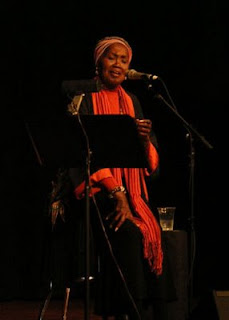 Odetta, an American music icon, died Dec. 3. If you've never heard her sing go to: http://www.thirteen.org/artsandculture/odetta-1930-2008 Definitely check out the second video -- her appearance on the Tavis Smiley show early this year -- she's 77 and still amazing.

(Image of Odetta is from Wikimedia commons)

Dec. 8
Mumbai Memorial Service
at Congregation B'Nai Abraham
527 Lombard Street, 7:30pm
A memorial service in honor of the memory of Rabbi Gavriel Noach Holtzberg, 29, director and founder of the Chabad House in Mumbai, and his wife, Rivkah, 28, who were brutally murdered along with hundreds of others will be held Monday, Dec. 8, at Congregation B'Nai Abraham, 527 Lombard Street, at 7:30 p.m. For more information, call 215-238-2100.
Posted by Unknown at 12:37 PM No comments:

Email ThisBlogThis!Share to TwitterShare to FacebookShare to Pinterest
Labels: philadelphia

Just received notice of the following:

This new national awards program will provide four $50,000 awards annually to exceptional initiatives that promote immigrant integration. The J.M. Kaplan Fund is providing support for these awards in each of the next three years to focus attention on successful integration initiatives, and to inspire and provide program models to others around the United States who might also undertake such efforts.

(The organization defines immigrant integration as the two-way process by which immigrants and their children come to feel - and be - Americans and by which American identity and culture expand to reflect each new generation of immigrants.)

Application procedures and rules can be found at http://www.integrationawards.org/. The deadline for applications is January 31, 2009 at 9 p.m. EST. If you have any questions, please contact awardsinfo@migrationpolicy.org.