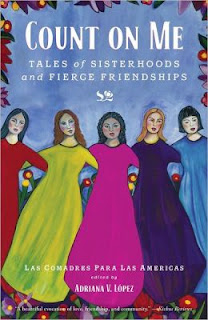 Comai. Compa. Comadre y compadre. These are all words we use that designate a friendship that is more than just friendship. It signals a commitment to lifelong engagement emotionally akin to the one made in religious rites by godparents. For Latinos, to be someone's comadre or compadre carries not simply the promise of shared good times, but of serious responsibility.

"Count on Me: Tales of Sisterhoods and Fierce Friendships" (Atria Books, 2012) explores the dynamics of comadrazgo through short writings by 12 writers, including big name Latino authors and emerging ones. The book is the brainchild of Nora Hoyos Comstock, the founder and leader of Las Comadres Para La Americas (which brings together Latinas from across the nation in bookclubs and events that strengthen community and shared conversations about Latino writers) and was edited by Adrianna López.

The short pieces of creative non-fiction are distinct from one another but have a strong unifying link in that none of the friendships depicted are casual. Many of them cross generational and socio-economic lines, and demand that the protagonists learn tough truths about emotional availability, and the nature of giving and receiving.

In Sofia Quintero's "The Miranda Manual," for example, the comadre relationship starts as commiseration between professional peers. With wonderful economy Quintero takes us through the deepening relationship — through cancer, perimenopause and a moment when each of them tells the other las verdades — while showing us the demands and, ulitmately, the resilience of friendships like this. Quintero is a New Yorker, with Puerto Rican and Dominican roots, and her piece has the energy, directness and also the distinct music of the city.

Reyna Grande's "My Teacher, My Friend" resounds with a different kind of music. Grande immigrated from Mexico as a young girl, to reunite with parents working here. She came to Los Angeles from desperate poverty to encounter a different sort of desperation. Her parents had split and the home she came to (her father's) was abusive. Her comadrazgo, with a teacher at the community college where she studies, is a testament to friendships that open — doors, hands, hearts and ways. Grande, whose most recent book was named a finalist for the National Book Critics Circle Award in January, recounts it all with an engaging humility and directness.

Luis Alberto Urrea's piece is a unique offering in several ways: he's the only male writer included, and story touches on a number the social challenges including extreme poverty, narco violence and living centered on the dump of one of Mexico's border community. The stakes are so high in this story of Urrea's lifelong friendship — across more than one kind of border — with a resident of the dump community that its unfolding and eventual conclusion is nothing less than a triumph.

Hoyos Comstock and López have made some terrific editorial choices with the book. Some of them are unusual — like separately including the recipes referenced in Daisy Martinez's piece. Others are just smart choices — like publishing separate Spanish and English-language versions.

But what really commends the book is the fact that it introduces readers to accomplished writers addressing a universal theme in distinctly Latino ways. Through Las Comadres para las Americas, the book does something else as well, it reaches a readership that is dreadfully underserved by mainstream presses — Latinas.

“Count on me” (and “Cuenta conmigo”) is available in ebook and print from Amazon. com. (To read this review in Spanish click this link: Comadres, historias y la vida latina en Estados Unidos.)
Posted by Unknown at 9:04 AM No comments:

Editor's note: this is the ninth in a monthly (sometimes twice-monthly) series of guest blog posts in which emerging Latina writers talk about their work, their process and what inspires them. 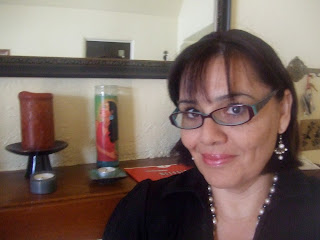 Gina Ruiz is a freelance writer, poet and book reviewer whose first love has always been books. Gina has maintained several blogs over the years: Doña Lupe’s Kitchen, AmoXcalli, The Camellia Project and Twirling and Typos. Her poetry has been published on PoeticDiversity.org and her book reviews and articles published on La Bloga and Xispas, two web sites with a strong Hispanic/Latino focus. She  is also a columnist with Blogcritics.org and has been a panelist and social media person for the Cybils awards for the past six years. She is a member of SCBWI - Los Angeles Chapter. She has a short story in ¡Ban This!, is sometimes a featured writer on Pocho.com and has a new short stories in the upcoming anthology, Lowriting. She is currently working on a novel about La Llorona.


Telling stories about cholos and aliens, La Llorona and life

Sabrina told me via Facebook that I promised months ago to write about what inspires me in my writing and I am wondering what madness possessed me when I pledged such a thing.

I’m 51 years old and it took me fifty of those years to become an author. A writer — that I’ve been all my life. I can’t remember when I first picked up a pencil and started writing, but I do remember I wrote on anything and everything. I kept journals daily. I wrote stories in my head on the way to school. I made up stories at bedtime for my children, because they wanted personal, not just the things I read to them in books. I started writing poetry early on too, but it wasn’t until my grandson Aiden was born that I became a published poet with Cien Años, the elegiac poem I wrote in honor of his birth and in remembrance of my grandfather, Salvador Camarillo.

If I have to say what inspires me, and try to wrestle that muse down, I can’t do it. There is no one thing and it’s rarely the same thing twice. Inspiration is like lightning — it falls where it may, when it wants and sometimes it misses. A lot of what I write comes from ancestors, that grandfather I mentioned was a hell of a storyteller, and I’m half Irish — a whole culture with a deep history of storytelling. Memories of a certain smell, the feeling of wind on my face or the simple act of teaching my granddaughter how to bake can become a story or a poem.

I think the writer’s job is to be an observer and I’ve had good training there. Early on in my career, I worked for a vocational rehabilitation firm. We studied our injured worker clientele carefully — watched for pain behavior; tested their reach, grip, walking ability, punctuality, grooming, speech, interests, dexterity and even their personalities with tests and copious notes. We wrote behavioral observations every 15 minutes for the six-hour work day. Those very detailed notes and test scores eventually became a voluminous report that went off to insurance companies, lawyers, and counselors.

It was important work and it was taken seriously. Sending an injured worker back to his or her job at the wrong time could re-injure them and cause permanent damage. I worked for some of the best in the business and I learned a lot. Later, at another vocational rehab firm, I took others' notes and transcribed them into reports, listening to observations rather than making them. I also worked with an occupational therapist as a translator in that same firm and learned from her how the body works.

All of this has made me a keen observer. I watch without realizing I’m doing it. I could be on a morning train to work and the way a person sits tells me they have a low back injury which makes me wonder how it happened, which leads to me making up a story about an accident. On the way home, I could be waiting at a bus stop watching a tree bend slowly in the breeze and that tree becomes two jacarandas — the beginning in a something I am working on, called Llorona.

“The sun is warm, even in the coolness of the courtyard and it warms her skin, brightening the hair on her arms with its light. The two jacaranda trees sway in the distance, gently moving, leaves swinging in time. She is fascinated by the trees, her body unconsciously swaying with it. She notices that though they grow together, each tree reaches in an opposite direction — like angry lovers. The sky is such a pale blue that it is almost colorless and she blinks, remembering eyes like that and shakes her head to force the memory of them out.”


I write about cholos in East Los Angeles too. People often ask me why and to be honest, I don’t know really. I grew up in barrios and I’d watch them. They’ve always lived around me and I around them and they are the guys that actually stand and give me a seat on the bus, or hold open a door when everyone else is pushing past me in the morning or afternoon rush.

I’m comfortable with the gente and so I write about their imagined hopes and dreams. I give them unlikely heroes that defeat aliens, speak to ghosts and rise above what they are given. You can read about my cholos and aliens in the book ¡Ban This! (Broken Sword Publications, 2012) ; here, here and here at Pocho.com; and in the upcoming Lowriting (also Broken Sword Publications). I also review books and write about food, culture and tech on my blogs (including Ginaruiz.com).

What inspires me? I guess if I had to sum it up in a word it would be life.
Posted by Unknown at 8:40 PM 1 comment: