This is 1) an incredibly moving story; 2) the best example of long-form journalism I've seen in ages; 3) the Guatemala that shaped who I am, how I see the world and my need to tell stories about it; and 4) one of the reasons why memory/remembering/witnessing/breaking silence are recurring motifs in my work.

Are we betting on hate?

(This column first appeared in Spanish on pontealdia.com)

In a lot of ways I’m a glass-half-empty person. If there is a worse case scenario to be imagined that’s the one I’m sure to worry first.

Except when it comes to people.

See, I think people are fundamentally good and that no matter our differences and radically different beliefs we’re all searching for the same things: love, a sense of community, peace, happiness. Every so often life conspires to knock this glass-half-full faith in my fellow humans right out of me.

I’ve been an advocate for immigrants for a long time. Nearly all my blog posts and stories and many of my articles or columns in the past years have focused on what others have named (rightfully, I think) the civil rights struggle of our time. And, yes, I’ve seen a lot of ugliness in what I’ve had to write about during these years of escalating anti-Latino sentiment and anti-immigrant rhetoric. I need look no further than the fatal beating of Luis Ramirez and subsequent police cover-up in Shenandoah, Pa., to admit that sometimes human intention is outright sinister and maleficent.

But there’s no use denying it — I’m always floored by the proof that my fundamental view of people might be completely, and utterly, wrong.

Earlier this month I chanced upon a terrible example connected with the Trayvon Martin case. There is no doubt that the case of the 17-year-old unarmed African-American youth shot by George Zimmerman, a neighborhood watch volunteer in Sanford, Fla., has brought out the worst in people — from veteran news commentator Geraldo Rivera to renowned film director Spike Lee — and yet I wasn’t prepared.

An Orlando television station, WKMG, reported that the Hiller Armament Company, a mail-order venue for gun enthusiasts located in Virginia, was selling paper target silhouettes depicting a hoodie with a target over the chest and a bag of Skittles and bottle of Arizona iced-tea held under the arm. The iconic symbols of the tragic Trayvon killing.

My horror at realizing someone thought to produce this grotesquerie was only surpassed by the horror that the company thought it was okay to market it (in packages of 10) and that people had, indeed, purchased it (at about $17 a pop, according to reports).

I want to think that if whomever purchased the targets saw his/her daughter or son’s face in the opening of the hoodie, he/she would realize exactly what the purchase means. I want to think the same thing about the maker. I want to think that no matter how sinister and maleficent the intent of this, there’s the possibility of an epiphany. The realization that no child should go through life wearing a target.

I want to think that because, as I said, when it comes to people, I want to see the glass half full. But I’m sitting here, in front of the computer, with the image of the “Trayvon Target” filling the screen of my monitor as I type.

Who uses an image of a dead child for target practice?

Because if any one of us is betting on hate, none of us gets away without taking responsibility.
Posted by Unknown at 9:53 PM No comments:

Who are we helping? 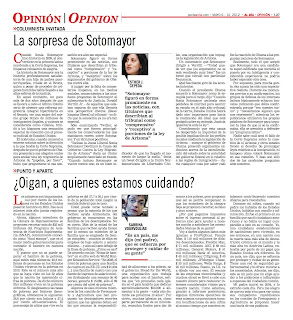 (This post first appeared in Spanish in the May 6 issue of Al Día News.)

The numbers are shocking.

14.5 percent of households went hungry in 2010. That’s the highest number ever recorded in the United States.

Now, some members of House of Representatives are proposing to cut more than $35 billion from the Supplemental Nutrition Assistance Program (SNAP), commonly known as food stamps, which is the government’s best means of addressing hunger in our nation.

And, since you can’t sever hunger from poverty, here are some more numbers for you to think on: 46.9 million people were in poverty in 2010. This is the highest number in the 52 years the nation has tracked poverty numbers. Of those, 20.5 million live in extreme poverty. If we break down the poverty rates by demographic, we get this: Latinos 26.6 percent; African Americans 27.4 percent. The percentage of children living in poverty is 27.7 to 36.1 percent of the total population (depending which federal measure you use).

You might be tempted to think that the majority of those receiving food aid from the government are in the families of the unemployed. Think again. More than half of the families that receive help have at least one member of the family who is employed fulltime — many of them at low or minimum wage jobs — and still fall beneath the poverty line. How? According to the World Hunger Education Service’s “Hunger Notes” web site: ‘In 2008, the official U.S. poverty level for a family of 4 was $21,834 [...] with a 40 hour week, a family of 4 with one minimum wage earner would earn $15,080, only 69 percent of the poverty level.”

Some of those same members of the House Budget and House Agriculture Committee proposing the devastating cuts are saying that churches should be the ones taking responsibility for feeding the poor, not the government. Bread for the World, a faith-based organization that works to end hunger, estimates that “on average every church in the country would have to come up with approximately $50,000 dedicated to feeding people — every year for the next 10 years.” The thing is that many churches already do feed the poor on an ongoing basis, but proposing that they could make up what the House members are proposing to cut is disingenuous.

What do we pay individual income taxes to government for if not to help our nation provide for the basic needs of its people?

I’m going to give you some more figures (thanks to ProPublica): Fannie Mae, $116 billion disbursed; Freddie Mac, $71 billion; AIG, $68 billion; General Motors, $51 billion; Bank of America, $45 billion; Citigroup, $45 billion; JPMorgan Chase, $25 billion; Wells Fargo, $25 billion. Well, I could go on, but you catch my drift. The bailouts of the aforementioned corporate entities (and many others) took taxpayer money to restore interests considered vital to our nation. As we know from subsequent reports, a number of CEOs from those same corporations took home six figure bonuses at the same time as ordinary taxpayers were contributing our hard-earned dollars to bailing them out.

During my childhood, when my father would tell me about the United States, he talked about his country with pride and admiration. He was the first in his family to be born an American citizen and there was no place comparable to this one in his heart. I, an American citizen from birth but one who grew up in a nation with the fourth highest rate of chronic malnutrition in the world and the highest in Latin America, understood from him that the United States was different. It was a country, he told me, that strove to protect and take care of its people. It had a governmental safety net and offered recourse for those in need. Moreover, he said, it was a country which didn’t choose to aid the powerful and influential at the expense of the ordinary citizen.

My father died in 2004, and I miss him every day. But I’m glad he’s not around to see how his fellow Republicans on that blasted House Budget and House Agriculture Committee are proposing to make a mockery of his words.
Posted by Unknown at 11:12 AM No comments: