Hago la lucha: La Gorda and the City of Silver

This past July, at Readercon, I participated in a Latino SFF writers reading with two masterful readers: Daniel José Older and Julia Rios. Since I was doing a solo reading from my novel INK later, I chose to read one of my short stories La Gorda and the City of Silver, which appeared in the Crossed Genres anthology Fat Girl in a Strange Land early in 2012. The story has been one of the best received of any of my short stories, and I had never read it publicly before, so I threw myself into it and tried to match the exuberance and skill of my co-readers.

Like so many of my stories, La Gorda has a political underpinning. Guatemala has one of the highest rates of femicide in Latin America and I knew the fictional luchadora I had created was going make protecting the women and girls of her neighborhood her mission.

The odd thing about La Gorda is that her family life — she is the daughter of a lucha libre filmmaker, and goddaughter to his stable of luchadores — is based on reality. My grandmother actually lived in Ciudad de Plata (City of Silver), the Zone 7 neighborhood in Guatemala I describe in the story, and her next door neighbor was a man called Rafael Lanuza.

If you look at the photo at the top of this blog post you will see a poster of one of Lanuza's most popular early films, Superzán y el niño del espacio —Superzan and the boy from space — which, like others of his lucha libre films, was partially filmed in his backyard in City of Silver. I watched, over my grandmother's fence, as scenes from some of Lanuza's luchador short films were being shot, and remember my grandmother introducing the filmmaker to me once. He wore a suit, and a hat, and looked so staid to me — but out of his mind came these wild movies that combined a popular luchador hero and pulpy Sci Fi elements....

While Lanuza went on to earn his fame as Guatemala's leading filmmaker with a non-lucha libre film called Terremoto (Earthquake), the luchador films are the ones my grandmother took us to a Zone 7 movie theater to see.

They were super low-budget films (many of Lanuza's actors were his relatives), tacky and over the top, and called forth audience participation on par with that of the Rocky Horror Picture Show at the height of its popularity. But, unlike Rocky Horror, the interaction, the jeers and cheers, were completely unstudied. Just the community reacting to good and evil playing out in black and white on the screen in front of them.

I loved the experience even as I was embarrassed by it.

By the way, my story hinges on La Gorda not being able to become an official luchadora because she is a woman, and while that accurately reflects the world of lucha libre in Guatemala during the 1970s of Lanuza's filmic heyday — it is no longer true. There are luchadoras in Mexican lucha libre these days (though at least one article I've read argues there are still too few of them, and that they are poorly paid compared to their male counterparts).

It is interesting to note that as more Mexicans and Central Americans have immigrated to the United States, lucha libre has immigrated with us. So much so, in fact, that the luchadores with their iconographic masks have found their way into more mainstream pop culture. There is a Hellboy as luchador series of books, and even the TV show, Angel, featured an episode with a luchador character.

At their heart, luchadores are populist folk heroes, the defenders of good and of the people. In Lanuza's Superzán movie, the boy from space bears a message of peace, love and goodwill. It is up to the luchador Superzán, along with a couple of indigenous Maya allies, to save the boy from those who would silence him and use his telepathic ability to nefarious purpose.

My stories are often resolved in bittersweet ways. But not La Gorda. Hers is a triumph of community, of ordinary people putting a stop to the predation and evil that takes place in the streets around them.

Because everyone — mask or not — can stand as a hero.

Editor's note: this is the tenth in a monthly (sometimes twice-monthly) series of guest blog posts in which emerging Latina writers talk about their work, their process and what inspires them. 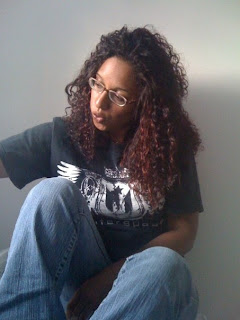 Melissa Fontanez is working on a collection of poetry and her first novel. Her poem, “four ways of looking at the moon,” was published in the chapbook Something in the Water. Books, photography and music consume her life, but the love for her family shines the brightest.

If you pay attention and listen to the world around you, the magic of inspiration is not hard to find.

My poetry reflects emotions, thoughts and feelings I have swirling around inside. The light touch of a breeze sliding along my skin. Standing under a tree at night, staring up at the moon. Watching my daughter purse her lips and the tufts of dandelion floating away with her wish. Listening to the stark quiet of a winter’s day. Admiring the vibrancy and rustle of fall leaves. The pleasure and pain of love. It all speaks to me and has me running for the nearest pen and paper, trying to capture it all. Writing poetry also helps me work out things that may be bothering me, or a way to remember all the good.

The novel I’m working on started with one red thread.

Each member of the writing workshop I belong to was told to close our eyes as our instructor placed a thread in each of our hands. I opened my eyes, ran my finger over it lightly until I started to write. From that prompt, came one of my main characters, Ines. She picked at the thread on her sweater, as she anxiously waited for some news. I can’t tell you what that is; you’ll just have to read all about it when I’ve finished the book, but just that simple, lone thread inspired me to do something I thought I never would.

I won’t sit here and say it’s always easy. Any writer can tell you that. I battle with loving and hating my work. For the longest time it was hard for me to even share it with others. It is a very vulnerable position to be in, but there is nothing else I would rather do.

I can only hope that someone will read my work and be able to identify with it in some way. That’s always my favorite part when I’m reading; to be able to connect with the words and find your voice.

So be open, to everything, and see where it takes you.
Posted by Unknown at 7:01 PM 2 comments:

Email ThisBlogThis!Share to TwitterShare to FacebookShare to Pinterest
Labels: Emerging Latina writers talk about their work, Latinas, Melissa Fontanez, Nuestras Voces, Our Voices, poetry, something in the water, vourvoulias, writing

Reading at the Fall Arts Festival (FAF) in Woodbury in September 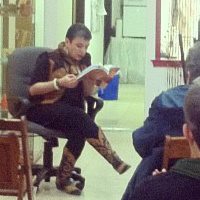 I will be reading at the Fall Arts Festival in Woodbury, N.J. on Saturday, Sept. 28th, at 3 p.m. and again at 4:30 p.m. at The Lab on Broad Street. Reading the same day: Jenny Milchman, E.C. Myers, Sally Lilychild Willowbee, C.S.E. Cooney and Jennifer Walkup. More writers will be taking the stage on Sunday, for more information about both day's readers, click here.