Writer Teresa Frohock, who writes elegantly chilling speculative fiction (read about her new novella, The Broken Road, here) invited me to participate in this deceptively simple blog tour. So, here it is, meet one of my characters.

1. What is the name of your character?

2. Is he fictional or a historic person?

Well, he’s a fictional character, but he is also a tuckerization of writer and friend, Anthony Cardno.

3. When and where is the story set?

It is set in Guatemala, mainly during the armed internal conflict which spanned 36 years from 1960 to 1996.

4. What should we know about him?

Anthony is a human rights special rapporteur who will do whatever he needs to do to secure the physical evidence necessary to produce irrefutable reports on the abuses that are taking place in the countries he monitors. He has a soft spot for Guatemala, where he has struck a deep friendship with a young journalist, John Herit, and has an enduring but conflicted friendship with Corazón, the owner of a bar he frequents. Oh, and Corazón also happens to be a monster...

5. What is the main conflict? What messes up his life?

All of the conflicts in the story are born from attempts to hide — or ferret out — the truth behind an “official story.” Countries redact their history and, sometimes, so do individuals.

6. What is the personal goal of the character?

He wants to excise what is monstrous in our world.

7. Is there a working title for this novel, and can we read more about it?

Well, it’s not a novel, but a short story titled “The Bar at the End of the World.” Read more about it here.

8. When can we expect the book to be published or when was it published? 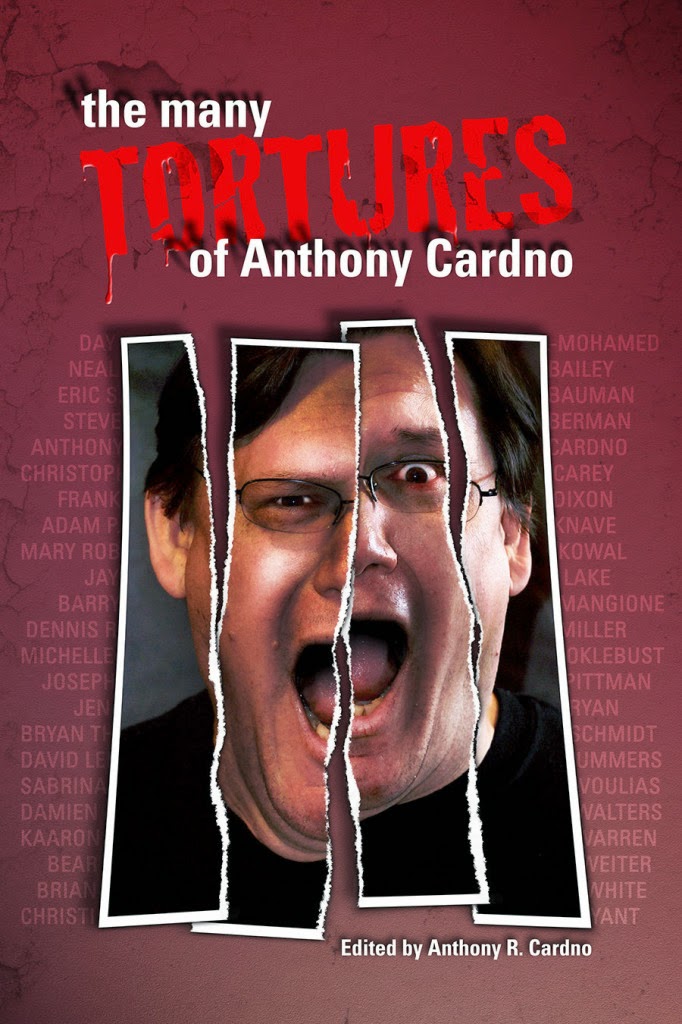 The story is part of the anthology “The Many Tortures of Anthony Cardno,” which was published in July of this year as a charity endeavor to raise money for cancer research. There are a lot of well known writers who contributed their stories to the anthology including Mary Robinette Kowal, Christine Yant, Damien Angelica Walters. It also contains one of Jay Lake’s final stories before he succumbed to cancer. The anthology is available in print and as an ebook, and I encourage you to buy it both for the pleasure of reading it, and as a way to strike back at a disease that has claimed the lives of so many.

To continue the blog tour, I’m tagging three Latina writers: the incredible, seriously talented Gina Ruiz; an exceptionally promising up-and-coming writer, Ezzy Guerrero-Languzzi; and Jessica Olivarez-Mazone, who’s just getting started on her writer's journey but has many uniquely Tejana stories to tell.
Posted by Unknown at 11:30 AM No comments: