Getting published, on the other hand, can be all kinds of miserable. Especially, if you happen to write speculative fiction that doesn't adhere to beloved (and worn threadbare) tropes, or if your writing style and protagonists are far from the default that the dominant culture assumes. Latino writer Daniel José Older has written eloquently about this and related topics on Salon and Buzzfeed.

As it happens, fairly early in his career, Older was published in the first iteration of Crossed Genres magazine, and subsequently the book side of CG published his acclaimed collection of short stories, Salsa Nocturna.

That first iteration of Crossed Genres magazine also published early work by Chinese-American SFF writer Ken Liu, whose work has gone on to be recognized with Nebula, Hugo and World Fantasy awards.

While Older and Liu may be some of the best-known of the magazine's alums, CG has a rare eye for talent, and many emerging writers have been published in the pages of its anthologies, its first magazine, and the newer version of Crossed Genres magazine (which is a Science Fiction and Fantasy Writers of America professional qualifying market), including Teresa Jusino, Priya Chand, Anthony Cardno, Shay Darrach, Athena Andreadis, A.J. Fitzwater, Kelly Jennings, Ibi Zoboi and many others.

All distinct and distinctive writers with one thing in common: they knock the default right out of speculative

The thing is, it's not by chance that Older, Liu and the rest of the CG cohort have been published by the small, Boston-based press. Publishers Kay Holt and Bart Leib are committed to running a magazine and press that reflects the true breadth and range of today's speculative fiction. Because of Holt's and Leib's outreach to QUILTBAG, trans*, writers of color, international and non-Anglophone writers, CG has been labelled by some genre purists as "destroying SFF."

That alone is enough to endear them to me for the next several hundred years. But, the truth is, I'm already forever indebted to them. The first speculative fiction story I sold, Flying with the Dead, was to CG (version 1). Other stories appeared in their anthologies Fat Girl in a Strange Land, Menial: Skilled Labor in Science Fiction, and the upcoming Long Hidden: Speculative Fiction from the Margins of History, which will launch in May. They also published my novel, INK — half magical realism, half immigration-based political dystopia — written by an older Latina writer whose publication credits at the time were solely in journalism.... ¡Híjole! It still boggles the mind that they took the chance.

Crossed Genres has three days to go on a Kickstarter campaign that will enable them to continue publishing the pro-rate magazine for another year and become self-sufficient. I don't tend to enjoin my friends and readers to support kickstarters, but I believe speculative fiction needs magazines and presses exactly like CG — you know, the ones that see the past, present and future with you and me in it.

I plan to support Crossed Genres and I really hope you will too. (Need that kickstarter link again? Here you go.)

The Macondo of the soul: How Gabriel García Márquez taught me to believe in words 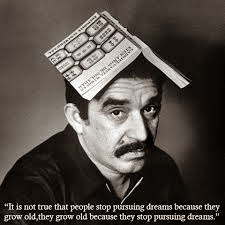 I was a girl growing up in a Guatemala wracked by a bloody, undeclared civil war. I knew magic existed, because I knew books existed. And there was one I wanted desperately to read — Cien Años de Soledad — One Hundred Years of Solitude, which was on my mother’s nightstand and on the lips of every adult in my life. I was seven.

“No, you’re not old enough,” she responded.

I knew what that meant. It must have sex in it, and no amount of complaining would change her mind.

García Márquez was a journalist before he became a fiction writer and I, who have followed that same trajectory, understand perfectly why. Some truths can only be told in fiction; some reports rival the most vile and grotesque imaginings.