Editor's note: this is the 14th in a monthly (sometimes twice-monthly) series of guest blog posts in which emerging Latina writers talk about their work, their process and what inspires them. 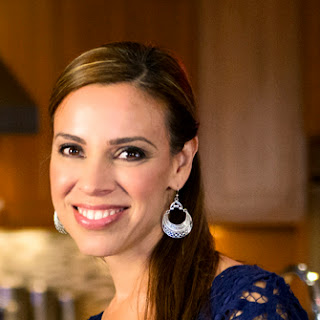 Yvette Marquez draws culinary inspiration from her grandmother's old-world northern Mexican recipes and her mother's comforting south of the border home-style dishes. Though she writes primarily about her culinary adventures on her blog, MuyBuenoCookbook.com, she also contributes recipes to Betty Crocker and Parade.com. Her cookbook Muy Bueno: Three Generations of Authentic Mexican Flavor (Hippocrene Books), written with her sister Veronica and mother Evangelina, was published in October 2012. Besides her blog, Yvette has also been featured in Latina Magazine, and the websites of The Pioneer Woman, SAVEUR, Siempre Mujer, and Gourmet, among others. She lives in Colorado with her husband and two children. You can follow her on Twitter @muybuenocooking.


I was a fulltime graphic designer and mother – always creative, but always working for someone else. I loved to entertain and I loved to cook for anyone who visited.

One summer my mother was visiting me and we cooked a lot of the recipes I grew up eating. Recipes my late grandma would make for us, favorite recipes my mom would make, and it inspired me to develop my own Latin-inspired recipes. I started writing down every recipe and I took lots of photos (not professional by any means). Then my 8-year-old daughter gave us the idea to write a cookbook. At first we were going to self-publish, but luckily got the nerve to send a proposal and our manuscript to a publisher. They loved our three-generation Mexican cookbook idea and especially loved the photos that were captured by my friend Jeanine who is a professional photographer.

Fast forward a couple of years later and we have a published cookbook and now I am self employed. I still love graphic design and even designed our cookbook and blog. I also am a full-time food writer for Parade Magazine and develop recipes for Betty Crocker, KitchenAid, and Clabber Girl just to name a few.

When my grandmother passed away in 2004 I was afraid her recipes would die too – thankfully my mother knew how to make every one of her recipes. And together, with my sister, we co-wrote a beautiful cookbook that not only shares recipes but the memories and stories that go along with them. It is a delicious family love story that I am so proud to leave behind for my children and future generations.
Posted by Unknown at 6:29 AM No comments:

Editor's note: this is the 13th in a monthly (sometimes twice-monthly) series of guest blog posts in which emerging Latina writers talk about their work, their process and what inspires them. Lisa M. Bradley writes speculative fiction and poetry. She has work forthcoming in Strange Horizons, Stone Telling, and Mythic Delirium. Originally from South Texas, she now lives in Iowa with her spouse, child, and two cats. Her latest project is a weekly blog series, "Writing Latin@ Characters Well." She listened to "Why We Build the Wall" (from Anaïs Mitchell's album Hadestown) nonstop as she wrote the following essay.


I think about borders. A lot.

It's probably natural, considering I grew up in South Texas, just minutes away from the international border. Once when I was young and living with my grandparents, a couple of men came to our door. Wet, ragged. Exhausted, wary. I fetched Gram and after speaking with them for a few minutes, she went to the kitchen and put together leftovers in aluminum foil for them, then tersely sent them on their way. I remember being surprised that my grouchy grandmother was giving food to apparent strangers. She didn't even like it when I served myself too large a glass of milk. I asked her who those men were, and she said they'd just crossed the river. She was pensive the rest of the day.

"The river" was, of course, the Rio Grande. I was amazed that the men had crossed a river without a boat, that they were on the run. I tried to imagine how scared and excited they were to be in another country, to be doing something illegal. I hoped they got away.

Another time, I went to Bentsen State Park with my family. The river runs right alongside the park, and when I looked across the sunny water, I saw sparse trees, some happy, relaxed goats, some people. I remember thinking, "That's Mexico. Those are Mexican goats. Those are Mexican people." I had to tell myself, because otherwise I wouldn't believe. The land over there looked exactly the same as on the American side. So did the goats. So did the people. We waved to each other. "That's Mexico" I told myself, trying to make it real. Trying to believe.

Living in Iowa hasn't diminished my interest in borders. If anything, the physical distance has brought the concept of borders into sharper focus. The novel I'm revising now is set in a west Texas town that's been quarantined after an industrial accident. The town is surrounded by watchtowers, an electrified fence, and a trench. The residents trapped inside protect themselves from violent neighbors by building barricades and booby-traps. Before long, it's impossible to tell who is fenced off and who is trapped inside, who the walls protect and who they keep out.

Even when I'm not writing about physical or geographic borders, I'm thinking about the hazy lines that divide one community from the next, one cause from another, one persona from the multiple voices inside our heads. I like to find chinks in the fences. My blog series "Writing Latin@ Characters Well" is an attempt to help non-Latin@ writers nudge under the fence of Thou Shalt Nots that discourages them from writing the Other.

A friend asked me to write specifically about the differences between what (conversations) the Latin@ community shares among themselves and what it shares with outsiders. This is the kind of question I love, but perhaps I am the wrong person to answer it. After all, I am so fond of transgressing. Is there anything I keep solely to mis compadres? Or even mis comadres? And if I can't keep private matters private, am I likely to be trusted by the community I seek to represent?

In How to Tame a Wild Tongue, Gloria Anzaldúa wrote, "being Mexican has nothing to do with which country one lives in. Being Mexican is a state of soul — not one of mind, not one of citizenship. Neither eagle nor serpent, but both. And like the ocean, neither animal respects borders."

By this definition, I am Mexican through and through, from one liminal "end" to an infinite number of other quasi-endpoints. My fascination with gaps in the walls, with crossing rivers fences laws, is not a barrier to but an illustration of my belonging to this group.

So maybe I'm a fine person to ask "what is shared and what kept hidden in Latin@ communities?" I'll poke at the question the same way I do all the fences blocking my view. I may not find an answer, but man…

It'll be fun tearing down the wall.

Posted by Unknown at 7:05 PM No comments: