SF Squeecast, the Skiffy and Fanty Show and the Outer Alliance podcasts

Who knew that podcasts would be one of the best ways to hear about books you might want to read?

I've recently discovered three podcasts that do that (and more), each in quite distinct ways. Truthfully, I discovered them because they've each provided a mention of my novel, INK, in one of their podcasts, but I've stayed because they've already augmented my "to be read" list.

SF Squeecast - brings together four or five SFF writers to talk about books, films and TV shows that have caught their attention. In episode 18 "You can't put your finger there"  you can hear author Elizabeth Bear talk about INK; along with Paul Cornell on the British TV show Quatermass; Seanan McGuire on the U.S. TV show Mockingbird Lane, Lynne M. Thomas' take on Love and Romanpunk by Tansy Rayner Roberts; and Catherynne M. Valente's delight in the novel Seaward by Susan Cooper. As you can see, it's a nice combination of very recent and classic SFF, and the discussion is in-depth enough to really make you want to read (or watch) the works discussed.

The Skiffy and Fanty Show - Shaun Duke and company deconstruct films, subgenres, the writer's process, anything and everything. In the interview with me, Episode 117, Shaun and Paul Weimer asked questions that were, for the most part, so out of the norm no one had yet asked them of me. So we delve into translation, for example, and the ways poetry, journalism and fiction intersect. There is a charming informality about the Skiffy and Fanty show podcasts, underpinned by intellectual and academic engagement, and a truly encyclopedic knowledge of the SFF genre. Plus, when they interview writers they give them nicknames. For future reference I am Sabrina Vourvoulias, a.k.a. the Octopus (hence the image on this post) because the book I issued is titled INK. They've recently interviewed writers Jay Kristoff and Cat Rambo, and it is worthwhile to trawl the archives. I really enjoyed an interview they did with Tobias Buckell (a.k.a. Captain Planet) in February.

Outer Alliance podcast - The Outer Alliance is a group of SFF writers who have come together as allies for the advocacy of LGBT issues in literature. The podcast is only one of many ways they focus attention on LGBT issues in SFF. Julia Rios conducts the podcast interviews, and she has something of the quality of NPR's Terry Gross — if Gross focused on SFF, diversity and representation in literature, that is. My first listen to the podcast was OA Podcast #23, which was an interview with Bart Leib and Kay Holt, the publishers of Crossed Genres (who published INK), which delved into their philosophy of publishing, among many other topics. In addition to interviews with writers like Elizabeth Hand and Tansy Rayner Roberts, Outer Alliance has conducted some fascinating topic-centered podcasts of panels at SFF conventions, like the "Heteronormativity in YA Dystopians" panel from WisCon and a "Changing the Conversation" program recorded at WorldCon.

If you listen through the end of the Skiffy and Fanty show podcast, you'll hear Shaun and Paul and I discuss one of the great advantages of indie bookstores — the way an informed bookseller can guide you to books you haven't heard about but that dovetail with your preferences, or even blow your preferences wide open. No algorithm on Amazon or Goodreads that picks "you might also like" suggestions can do what that informed bookseller in love with genre literature can. But I'm convinced that the sorts of genre-centered, literary podcasts I've highlighted here are as close to the virtual equivalent of that informed bookseller as you can get, and as such they perform a very, very valuable service to the genre and to us individually as readers and writers.

SF Squeecast, the Skiffy and Fanty Show and Outer Alliance are the three I've found, but I'm sure there are other podcasts out there worth discovering. Leave me links to the ones you like (and why) in the comment section.
Posted by Unknown at 1:39 PM 4 comments: 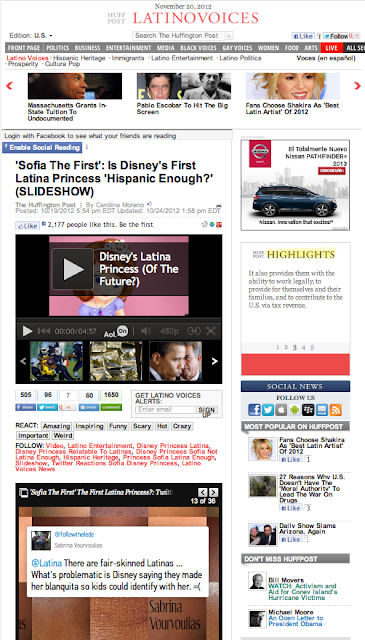 It was a tempest in a cartoon teapot.

There was an instant hubbub, after all, Sofia was fair-skinned, auburn-haired, blue-eyed. Although some of the buzz centered around the fact that this Disney princess looked very European (which, it has to be said, a number of Latinas do) most of the daggers that were being thrown had to do — rightfully — with a Disney spokeperson’s assertion that they made Sofia look like she did so that kids would be able to easily identify with her.

As if the darker-skinned among us were immediately off-putting to children ....

“Lightwashing” isn’t exclusive to Disney, of course. Some telenovelas produced in Mexico and Venezuela do it — casting lighter-skinned Latinas as main characters, while their darker peers are relegated to secondary, and often subservient, roles. “Lightening” creams are big business in Latin America, and India, and plenty of other countries as well.


As the din around the announcement about Sofia got more insistent, Disney backtracked.

Sofia’s mother was from some Spanish-speaking fairytale kingdom, they said, but Sofia ... well, she was multiethnic.

Someone misspoke, they added. She wasn’t intended to be the first Latina Disney princess at all.

HuffPoLive programmed a segment soon after the buzz started, and I was fortunate enough to be asked to participate. There were a mix of opinions. Some people thought it was a silly argument. Another felt it should prod Disney to truly create a Latina princess, while a third defended Disney by pointing out Latino characters in the Disney Channel’s non-animated shows. One quietly regretted the fact her daughters would go more years without seeing a character that looked like them in a Disney movie.

In the days and weeks after that HuffPoLive program lots of people posted comments and blogs on the topic.

Ana Flores — author of “Bilingual is Better” and co-founder of SpanglishBaby.com — asked Latinas to send her photos of their daughters — most of them about the right age to be Disney consumers — to show what “Latina princesses” really look like. The Pinterest board Flores created (http://pinterest.com/spanglishbaby/latinaprincess/) is charming and reminds that, thankfully, in real life girls aren’t all of one type. 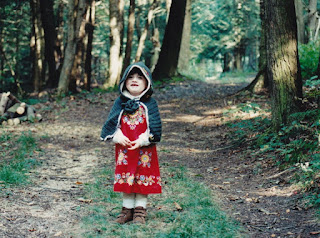 My own “Latina princess” is a good ten or twelve years past Disney’s target audience. She could not care less whether Disney creates a Latina princess, or what that princess might look like. But I remember her as child asking whether the characters in stories had her same physical attributes (light skin, dark hair, eyes that are neither light nor dark) and on the rare occasion they did, they became her favorites.

If there is a reason to pay attention to this Disney kerfuffle, it is because image, identity and expectation are so intrinsically tied together in the psyches of young girls. We like to think it is not so, that — because more girls are participating in sports and academic subjects that were once thought only the province of boys — we’ve put our daughters beyond the reach of feelings of erasure, underrepresentation or toxic self-doubt.

We like to think that we’ve raised our girls to see beyond the big blue eyes, the tiny waistline and impossibly silken hair of all the “Princess Sofias” in American pop culture.

But the statistics tell us we’re not doing too well with this.

According to the CDC, a full 21 percent of Latina girls between the ages of 12 and 17 have seriously considered suicide. And depending on whose statistics you use, 13.5 to 17 percent of them have attempted it. Forty-one percent of our daughters will fail to graduate from high school on time and with a standard diploma. Fifty-three percent will give birth to at least one child before the age of 20.

Whether Disney’s Princess Sofia is Latina, or not, is pretty insignificant in the scheme of things. But what a lost opportunity! Because childhood is precisely the time when our daughters are forming images of themselves and how they fit into the world. Think not? Take a look at this then:


Now, there’s real Latina royalty for you.
Posted by Unknown at 5:56 PM 1 comment: 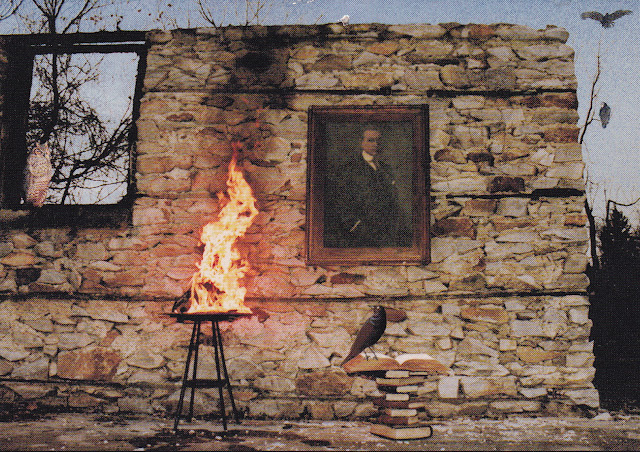 This exhibition announcement with its photograph by Cory Sprenkle has been tacked up on the bulletin board in my writing space for a while now. I love the colors; its mysterious, poetic sensibility; its nod to narrative, and the melancholy story it tempts.

I love the photograph so much, in fact, that I've been holding onto the postcard since 2000, when the exhibit "Doomsday: Revelations" took place at the Salon des Amis Gallery in Malvern, Pa. and this was one of the artworks included. I didn't go to the exhibit, by the way. It arrived at my parents' house shortly before my mother died very suddenly from a brain aneurysm, and was addressed to her. I don't know if I found it in the couple of weeks I spent with my dad after her death, or whether I found it eight months later, when I moved down to Pennsylvania permanently — after it became clear to me that my father was isolating himself, figuratively burying himself in a house full of the memories they shared.

Since I found it, I've tried googling Sprenkle, without much success. The images that pop up don't remotely key to what I imagine would be other works by this artist, and most of the web links have led me to dead-ends.

And, perhaps that's only fair. Some mysteries aren't meant to be unravelled.
Posted by Unknown at 2:46 PM No comments: 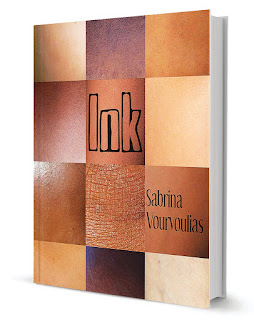 Thrilled to have Fox News Latino showcase my novel, INK! Read about its immigration theme, its link to Guatemala and my love of magical realism:
http://latino.foxnews.com/latino/lifestyle/2012/11/01/sabrina-vourvoulias-releases-new-novel-ink/

Posted by Unknown at 3:42 PM No comments: