The unbearable whiteness of being: Jo Walton's 'Among Others' 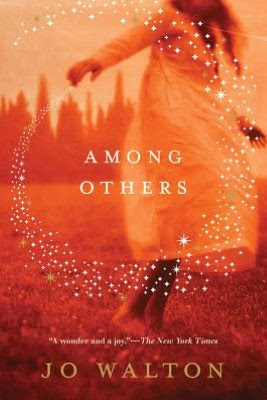 One of the last things to happen at Arisia Science Fiction and Fantasy convention in Boston before I left on Monday was Kiini Ibura Salaam (author of Ancient, Ancient) turning to me in the Crossed Genres Publications booth and asking me if I had read Jo Walton's "Among Others" (2010, Tor) and if not, whether I wanted her copy of it.

I had heard of the Nebula- and Hugo-award-winning novel but only really remembered one thing: that it was considered a love letter to the Science Fiction and Fantasy genre.

Kiini never did give me a yes or no answer.

I took the book anyway.

From the first, I had a hard time connecting with the main character. But I'm nothing if not stubborn, which means I rarely set aside a book. I kept soldiering through, hoping for that moment when I'd be caught up by the language, the characters or plot —something to which I could point and say "This. This is why the book has won its accolades." Don't get me wrong, I wasn't finding "Among Others" awful, just pedestrian.

I regret to say that the disappointment and disconnect persisted, right through the end. But worse, after the final confrontation of the book, I realized the feeling had become something stronger. Distaste. Enough to make me want to write this post.

A little context is perhaps in order. I had just come off four days of panels at Arisia, most of them dealing with issues of diversity and representation in SF/F, when I started the book. I always note the dearth of characters of color in the genre novels as I read, but the discussions about destructive tropes and monochromatic world-building had honed my attention even further. Perhaps if I had picked up "Among Others" at a different time I wouldn't have felt so acutely its white-only rendition of the world. Perhaps I wouldn't have noticed how the only schoolmate of color is nothing more than a stick figure with an exotic name. Perhaps I would have been more forgiving of the almost total lack of names of SF/F writers of color among the main character's collection of books.

Morwenna, the 15-year-old protagonist of "Among Others," is defined and moored by her love of speculative fiction. At first blush she seems like a protagonist most of us would have no problem  connecting with: a smart outsider living in the aftermath of tragedy.  Mor's newly moved to England from Wales because her mother has had a hand in permanently injuring her and killing her twin sister.

Mor is afraid her mother will come after her at boarding school (where she's been enrolled by a father she hardly knows) so she engages in protective spellcasting and consults with faeries, whose cryptic utterances she interprets as guidance.

But most of all Mor reads. A lot. References to SF/F books fly fast and furious through the novel. In a seamless juncture of formal and material, we understand from the first that Mor wouldn't exist if SF/F literature didn't exist.

I should like this part, right? Especially since I am a writer of SF/F and the conceit that writing is central to survival is something every writer would like to believe. Except that the SF/F references in "Among Others" feel more like syllabus than celebration of the genre to me, and all I wanted to do as I read was shake the heavy weight of canon off my back. I can't help but contrast this to the exuberant way SF/F and comic book references manifest in Junot Díaz's "The Brief Wondrous Life of Oscar Wao." Mor talks about SF/F, Oscar revels in it.

Mor disdains pop music, reads the Greeks, and completes writing assignments for her more dim-witted schoolmates. The SF/F she loves is a litmus test by which she measures the worth of others. It also provides the pass to a club wherein intellectualism is recognized and treasured. Walton gives the book club meetings a lot of real estate in the book. They are reflexive, of course, and probably the key to why this novel has been hailed as a love letter to SF/F —a genre that is often impugned as anti-intellectual and which carries, collectively, a huge chip on its shoulder about that characterization.

The ironic part is that if the intent of the book club sessions really was to accord intellectual weight and heft to the way we talk about speculative fiction, it was completely counterproductive in my case. I found the book discussion scenes lazy and facile; one-note (or cliff-note) facsimiles, slighter than the paper they were printed on. This is particularly annoying given that spec fic really has done self-reflexive intellectual discourse about literature well — take a look at Borges' stories if you don't believe me.

In any case, Walton is at pains to let us understand through these book club meetings that although Mor is an outsider, she is really better described as an insider's outsider.

The narrative arc of the book allows us to witness Mor's first inklings of love and sexual interest; we explore the crucible of family with her, and trace landscapes — both remembered and current — which shape her. We meet ghosts in her company, and ruminate on the nature of magic. It is an intimately focused narrative, quiet and evenly paced.

Mor's small ambit is filled with people just like her. Some are better at maths, or have less money, or have made mistakes in their past, but they are essentially uniform, interchangeable pieces lined up neatly on the white side of the author's chessboard.

During the endgame, Walton slides the black queen across the board.

Mor's mother, who we haven't seen but understand is probably insane and certainly responsible for great suffering, shows up for a long anticipated showdown at the conclusion of the book. She is described this way: "She looks like a witch. She has long greasy black hair, darkish skin, a hooked nose and a mole on her cheek. You couldn't typecast someone more like a witch."

And then, just to make sure we don't miss the tiresome, dark-evil-white-good trope she's exploiting, Walton gives us this about the other witches in the book (the ones who are no threat to Mor): "Of course the Sisters are witches too, and they're impeccably blond."

O-o-okay. For a book that takes itself seriously — and purports to take genre fiction seriously — the unexamined use of this trope is pretty remarkable. And not in a good way.

There is an unintentionally amusing moment toward the end of "Among Others." As Mor and her mother are locked in magical battle, the mother (Liz) starts ripping pages out of her edition of the Lord of the Rings, and turning them into flaming spears she throws at her daughter. I started laughing and found myself cheering Liz on.

Now, Tolkien is one of those weighty old farts we all carry on our backs if we chose to write SF/F. Many of us were introduced to SF/F through Tolkien, and LoTR is practically holy scripture to a good number of genre readers and writers. The destruction of this book, in particular, seems as close as Walton can get to showing the desecration of something important.

And I laughed and cheered. Why?

Despite its other meritorious attributes, the Lord of the Rings set the bar for the dark-evil-white-good trope in SF/F. It is a particularly ugly example of it, in fact, wherein every character described as dark or swarthy is in league with evil. Every one. This canon of canon has an unabashedly racist worldview that is undeniable, though those who love it will, and do, try to defend it vigorously. (In the spirit of full disclosure I must admit a deep and abiding love for Tolkien's highly problematic opus.)

So it was a kind of brilliant, poetic justice that the only real, dark character in "Among Others" (Liz) threw the pages of LoTR in the face of a guardian of the SF/F canon of whiteness (Mor). Weapon for weapon; damage for damage; wound for wound. I wish I believed Walton had done this intentionally, it would make the book more satisfyingly complicated, and less cloyingly self-congratulatory and complacent.

Walton's money line from the "Among Others" is this: "If you love books enough, books will love you back." It is a lovely line, and one that will delight many SF/F readers and writers. It would probably make a good motto silkscreened onto library totes, too.

But, in view of Walton's shabby treatment of her few "dark" characters, it is nicely worded lie. The real line should be: "If books love you enough, you will love them back."