In my work as the managing editor at Al Día News I spend a lot of time asking questions about the Latina experience in the United States. It is not an academic exercise. I’m intimately and professionally invested in examining the way we exist within a culture that sometimes erases, criminalizes or fetishizes us, and routinely overlooks our accomplishments.

I’ve heard many Latina stories, many Latina voices.. Each of those Latinas — cis and trans; immigrant and native-born; established and emergent; young and old — has something to say about what it means to be a Latina in the United States at this particular moment in time.

But that panoply of Latina voices has a hard time getting heard outside of specifically Latin@ circles. Sometimes, not even one Latina voice is heard.

NPR’s Code Switch, for example, picked up on the activity prompted by the #solidarityisforwhitewomen twitter hashtag created by writer Mikki Kendall, and generated a roundtable discussion that would explore the intersection of digital feminism and race in more depth than twitter’s 140-character limit permitted. They then asked Roxanne Gay, Jill Filipovic, and Kendall herself, to write posts for the site. The final two writers invited to the roundtable were Lindsey Yoo and Jamilah Lemieux (her piece is not posted yet, as I write this).

Three African-American writers (including the originator of the hashtag), one white blogger and one Korean-American. No Latinas.

It’s not that Latinas didn’t participate when the hashtag was trending, because we did. If memory serves, Aura Bogado, the news editor of Colorlines.com and a contributor to the Nation, was especially active. Even if I hadn't been following the hashtag, I would have seen this because she tops my "always read" list on twitter for her substantive, engaged take on the world.

Maybe NPR's Code Switch thought the problematic intersection of race and feminism was not a consideration for the 25 million mestizas, afrolatinas, indigenous and white Latinas who live in the United States. Or maybe they thought we had nothing to contribute that couldn’t be said better by others.

One of the most pernicious and pervasive biases about Latinas is the belief that we are intellectual lightweights.

According to the American Association of University Professors, Latina tenured or tenure-track female faculty members frequently find themselves facing stereotypes centered on intellectual capacity. “Some are told by colleagues that they are particularly articulate, or that they speak English well, implying that this is atypical,” a 2012 AAUP article states. “Others have described instances where students, other faculty members, or staff members have assumed that they are service workers or anything but professors.”

The opposition to Supreme Court Justice Sonia Sotomayor’s confirmation was also couched in terms of intellectual ability. Jeffrey Rosen’s profile in the New Republic, which served as her introduction to the public, was chock-full of quotes about the future Justice’s middling intelligence and lack of “intellectual gravitas.” When Salon’s Rebecca Traister analyzed this sentiment, she posited that the emphasis on lack of intellect showed just how difficult it was for a woman to be judged on par with male colleagues. But not too terribly long after Sotomayor became Justice, Elena Kagan, a white woman, went through her own confirmation hearing, during which she was characterized as talented and “scary smart.”

In popular imagination, we’re all sassy but vacuous Devious Maids; dopey and unintelligible Sofia Vergaras; or variants of Lupe Ontiveros' goodhearted, but undereducated, domestic worker (a role the talented actress played 150 times in Hollywood movies). There is no other Latina image, no matter how brilliant its exemplar, that approaches the amount of face time given to the stereotype of the intellectually challenged Latina.

Being dismissed as second-rank isn’t limited to Latinas of course, it is something that every woman of color faces, to lesser or greater degree, across almost every field of endeavor. The original hashtag of #solidarityisforwhitewomen was born precisely because this weaponized dismissal of credibility and authority is used so frequently against African-American women.

But, I’m a journalist as well as a Latina, and it’s galling to see my mainstream colleagues at NPR leaving Latinas wholly out of a serious discussion of the intersectionality of race and feminism. It indicates that they have closed their ears to the Latina voices so richly in evidence on the same platform where they noticed #solidarityisforwhitewomen trending.

Here are some Latina voices, in addition to Aura Bogado, that the folks at Code Switch should pause to hear:

There are many others, of course. So many varied, intelligent and thoroughly engaged Latina voices out there, speaking about all manner of issues. I invite NPR’S Code Switch to — as labor activist Dolores Huerta once said — get off the sidewalk and walk with us into history
Posted by Unknown at 10:41 AM No comments:

Editor's note: this is the 11th in a monthly (sometimes twice-monthly) series of guest blog posts in which emerging Latina writers talk about their work, their process and what inspires them. 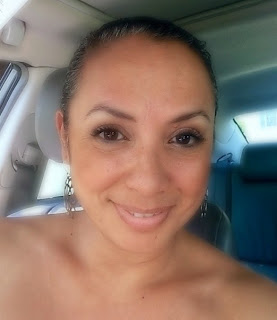 Ezzy Guerrero-Languzzi  received her B.S from the University of Southern California in Los Angeles, is currently completing her MEd in School Guidance at Cambridge College, and plans to pursue a CAGS in Trauma Studies. She believes in the curative effects of bibliotherapy. She is a writer who is strongly influenced by the sciences, and is currently working on a YA novel with the working title, Where Hazard Meets New Hope. She also blogs at Sincerely, Ezzy. She lives in Massachusetts with her husband, son, dog, and two chickens.


I didn’t grow up wanting to be a writer. A doctor, nurse, biologist, or astronomer, maybe, but a writer? Never. In fact, the thought didn’t occur to me until 2008, when I enrolled in an online grammar course through the Writer’s Digest. Something came alive in me during that grammar course ... a compulsion to continue enrolling in workshops. One class led to another, until I’d taken courses in the essentials: voice and viewpoint, dialogue, creativity and expression, plot and structure, and 12 weeks to a novel’s first draft —yeah, right— twice. 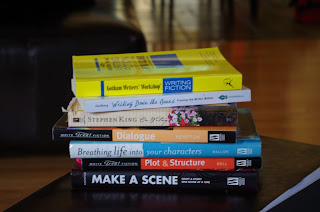 It’s also around then that I started to read books written by diverse authors, not necessarily ones you’d immediately find on the bestseller’s tables at Barnes and Noble. Imagine at my age, reading in print for the first time, thoughts I’d never shared with anyone, thinking that as the daughter of immigrant parents my feelings were unique. I’ve discovered voices I wish I’d read 20 years ago.

With each book I’ve read, I’ve also, realized how much I have yet to learn about storytelling. Certainly the workshops helped me hone my writing skills, but no workshop could teach me how to write authentically. This probably explains why, when friends ask about my work in progress, I change the subject and ask them what books they’re reading. First, because I love to talk about books, but second, because I’m superstitious. They remain unfinished.

Some (un)writerly quirks about me …

• I spend more time thinking about my story than I do actually writing it.

• My WIP is a cloud that follows me everywhere I go.

• The best ideas come to me at the worst times.

• The main character in my current novel is who I wish I could’ve been.

• I’m structured about most everything, except for my writing.

• I both love and hate to write – simultaneously.

• Being focused on the journey, rather than the finished product, helps me keep my sanity.

My current novel’s narrator is a 13-year-old Mexican-American girl, who attends private school on a scholarship with her two younger sisters. The story is set in Southern California and takes place during her spring break, when a series of events and tragedies change her life. Sibling rivalry, family secrets, and cultural drama are a few of the topics I tackle, sometime, with a bit of dry humor.

Here’s a glimpse into one of the novel's scene:

A tricked-out, neon purple car crawled low to the ground toward us, like a cat ready to pounce. Had it not been for the synthesized music turned low I might not have heard it until it was too late. It wasn’t until the car pulled up under the street lamp that I made out the silhouette of El Flaco sitting in the back seat of the car. Amber flecks lit up behind him like fireflies. Somebody smoked in the seat next to him.

Fear ran through me, covered me like a sheet of ice. I couldn’t move and sensed Celeste had taken a step back.

El Flaco leaned out of the open back window, looking like he did every day, without a care in the world. The hazy street lamp barely illuminated his dark features. “You ladies wanna party?”

Somehow I knew that my kind of party, the kind with balloons, a cake, and piñata, was not the kind of party this gangbanger had in mind.

“You better get out of here before my papi comes out,” I said with an uneven voice. Then the words just spilled out. “Can I ask you something?” I might as well have started digging my own grave.

El Flaco laughed and motioned to me with his chin. “Shoot.” I could barely make out his black eyes under the bandana he wore. He’d rested his arm on the side of the car. That’s when I saw for the first time that he had a tattoo of the Virgin Mary running the entire length of his upper arm, from his elbow to his shoulder. He wasn’t all that flaco, either, had some meat on those bones after all.

“Why’d you have to burn my parents’ shop?”

“That wasn’t us, morenita.”

“You’re a liar. I don’t believe you. You did it to get back at my father.”

“I don’t care what you believe,” he said, settling back inside the dark vehicle. “Maybe you should check with your old man."