Some thoughts about ageism, fear, failed posts and even more failed imaginations

I originally wanted to write about age and ageism as it manifests in the Speculative fiction world, where protagonists skip from mid-30s to mid-80s with no in-between, and where writers like to pretend their older peers are the source of all evil in the genre.

I like to believe I had some zingers in the original post, particularly as regards complimenting the old by saying we're "young for our years" and the part where you tell us that after we die off the genre will be free of sexism, racism and everything else that is wrong with it.

The post-that-was very quickly turned into a competently phrased j'accuse that let all and sundry know it is as easy to be snarky and supercilious at 53 as it is at 23. But then I got tired.

It's tiring to repeatedly call out bias (overt or covert), and as it happens I do that a lot in my tweets, in my editorials & columns for Al Día News, in my fiction and often enough, here. And in my tiredness I realized that my sentiments about the extent of ageism in SFF could be summed up better by a meme of seven words than a blog post of 700.

The meme, as it happens, is one that I had snagged for the initial post because it contained the only character my co-participants in a panel discussion on Aging in SFF * could reliably come up with when challenged to name an interesting older woman main protagonist in SFF. 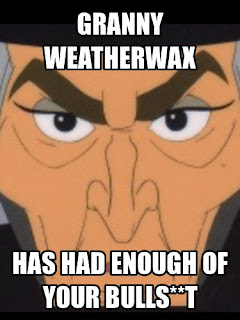 But enough about SFF. Let's talk about one of the root causes of ageism as we experience it here, in the U.S.: We're terrified of death.

Every grey hair, every sagging jowl, every age spot confirms that we are all slouching toward the same end. Which is probably why plastic surgery, hair dye and pop culture erasure of those who don't pass for young are so prevalent.

My mother, a Latina who could have given Granny Weatherwax a run for her money when it comes to formidable, used to say the reason there are so many old-folks homes in the United States is because Anglos don't want to live with reminders. Obviously this isn't the whole of it, nor even the main of it (nor is it restricted to Anglos) but it is part of it.

It isn't this way in all cultures.

A lot has been written about the Mexican tradition of Day of the Dead, much of it rubbish but some of it profound. All of it keys into the proliferation of skulls and skeletons — many of them dressed to resemble the living, others bearing our own frosted names on their bony foreheads. The home ofrendas for Day of the Dead are colorful and alive with photos, food stuffs and mementos associated with our beloved departed (as are the grave sites themselves) but the altars are as much about us as they are about our ancestors and those who have passed on. We're all represented.

Anglos sometimes tell me they find this tradition a bit creepy,  which I find interesting given it shares Halloween's timing and some of its iconography. I think it's the real life stuff that bothers them — the names of the living on the sugar skulls; the whisky bottle my comadre includes in her ofrenda because her uncle liked that particular kind; the little stone my mother hand painted as a skull placed on my own ofrenda table from a few years back; the way the skeletons are clothed and bear the accoutrements of living (my Catrina has a cigarette held between her bony fingers).

But it is precisely the combination of living and dead, of what we do and what our departed did, that makes putting together an ofrenda such a great antidote to fear of dying. And fear of aging.

I have started to gather the items for my ofrenda this year. Selecting flowers (I'm doing safflowers and sunflowers); hunting down photos and items; dusting off my gaudily dressed Catrina from Guadalajara (purchased when I was there with my father a few years before his death) and the folk-art painted paper coffins my mother collected — all of these will sweep away the moments this year when people intimated I should cover up the grey in my hair, or rethink the way I wear my age. I've passed into that moment in which I am closer to death than to my birth — I've earned my grey hair and saggy jowls and the memories, both sweet and salt, that will crowd my ofrenda on Nov. 1.

"Death is still the terrible yet amusing entity that establishes a compromise between memory and a sense of humor," writes Carlos Monsiváis, a Mexican journalist, critic and political activist, "and between the sense of humor and the irremediable." 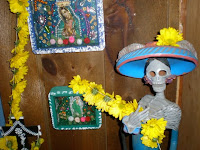 Memory. Sense of humor. The irremediable. Monsiváis may be explaining the persistence of Death as a motif in Mexican tradition and art, but he's also managed to articulate the components of the liminal  space we find ourselves in during our latter years. Which is why — getting back to my original failed post — it is so hard to believe SFF does so badly by aging.

Liminal spaces are beloved by SFF writers and readers: there have to be hundreds of stories that hinge on that moment on the borderland between faery and mundane world; the ritual that transforms child to adult; the step into the time machine. But not aging.

It is a failure of imagination of fantastical (pun intended) proportions. Because if SFF writers can't imagine this certain future, why would I trust them with any other?

*Kudos to Arisia for having a panel on Aging and SFF at all — they're light years ahead of other SFF conventions in this.