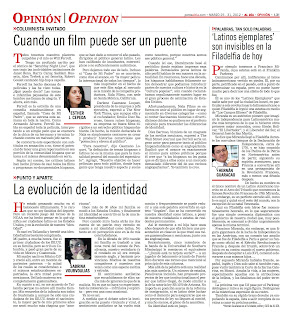 This column appears in Spanish in the March 25-31 edition of Al Día:

The evolution of an identity

I've been thinking a lot about basketball lately. And the strange thing is, I'm not a fan of the sport. But a recent game during the NCAA tournament has made me think of what it means to be a Latino citizen in the United States, and the evolution of our "identity."
I was born in Thailand and I inherited a rather complicated Latino identity. My father was extremely proud to be the first U.S. citizen in his family, but he grew up in Colombia and spent much of his life in Mexico and Guatemala.
My mother was born in México D.F. and grew up there among a bunch of paternal relatives, half of whom considered themselves expat Americans, the other half completely Mexican. The maternal side was all Guatemalan.
As for me, I don’t remember Thailand, because I wasn’t there long. My childhood memories are all from Guatemala and, though I’ve been a U.S. citizen from birth, for most of my early years I arguably much more chapina than “americana.”
More than 30 years ago my family moved to the United States, and I finally settled into identifying as a U.S. (i.e. American) Latina.
But when I look back I see strange pattern. Not so much in my perception of my identity as a U.S. Latina, but in those of my fellow citizens.
In the 1970s when my family moved to rural southeastern Pennsylvania, our neck of the woods was unrelievedly Anglo, and very insular. Many of our peers and teachers viewed us as strange exotics.
The anti-Latino sentiment we heard issue from them was born more of ignorance than malice. Not that I didn’t experience casual -- and not so casual -- bigotry but it was an occasional thing.
Not anymore.
As the immigration debate has gone both virulent and viral, anti-Latino sentiment has become commonplace and can often be reduced to one word:  “illegals.” That has become our identity as Latinos, regardless of our actual citizenship or permanent resident status.
It was the word flung at my daughter a few years ago after a schoolmate sat through a class presentation in which she traced her Guatemalan-Mexican roots along with her Anglo ones.
Recently, five members of the University of Southern Mississippi pep band chanted the equivalent -- “Where’s your green card?” -- to a Puerto Rican basketball player on the opposing Kansas State team during the tournament play I mentioned at the beginning of my column.
But beyond the word-turned-epithet is a even grimmer reality. A number of states, Pennsylvania included, have proposed legislative bills that would institutionalize Latino=illegal thinking along the lines of Arizona’s notorious SB 1070 law. No matter your individual stance on immigration, if you are Latino you should fight like the dickens to make sure that these copycat bills never make it into committee, much less onto the legislative floor.
Your very identity is at stake.

To read Al Día online go to: http://www.pontealdia.com/
Posted by Unknown at 10:46 AM No comments:

Launch date for INK is October 15!

So, the official launch date for my novel, INK, is October 15!

I'll post the cover as soon as it's set, and will post any info about a launch party (thinking, thinking).
Also, I'm definitely planning to be at Philcon. (Am also planning to go to Readercon, but only as a participant since my book won't yet be out).

More deets about everything to follow....
Posted by Unknown at 11:40 PM No comments: