Off topic: Another poem to read

So many fairy tales and myths to recast into poetry, so little time.

Click here to read my piece which appears in the latest issue of Scheherezade's Bequest, the online publication of Cabinet des Fees, a journal of fairy tales.

Besides the allusion to the character in the Arthurian cycle of myths, a fata morgana is a mirage or optical illusion that appears just above the horizon line.
Posted by Unknown at 5:25 PM No comments:

H.R. 5748 would eliminate racial profiling by law enforcement.
Latest Major Action: 7/15/2010: Referred to House committee. Status: Referred to the House Committee on the Judiciary.
Read the full text of the bill here.

Face the Truth: Racial Profiling Across America from Breakthrough on Vimeo.

Posted by Unknown at 1:13 AM No comments: 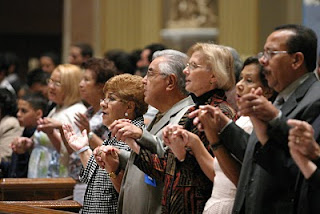 Anna Vega, the director of the Office for Hispanic Catholics of the Archdiocese of Philadelphia, is retiring after 17 years. A staunch advocate for immigrants, Vega has been instrumental in so many initiatives for the Latino Catholic community (and the Latino community as a whole) it may take a battalion of people to replace her.

I've worked with her as part of the committee for the annual Hispanic Heritage Mass, and on a regular basis in consultation about the Spanish-language page of the Catholic Standard & Times. I've partaken of her stellar pernil and coquito; I've cried on her shoulder and mostly I've laughed, a lot, with her.

I'll never forget walking into her office one day to hear her get a desperate call from a day worker picked up, with many others, from the parking lot of a local Home Depot and taken to the police station. His first call was to the Office of Hispanic Catholics. Because he knew of her, and knew she would try to locate family, contact the council person for that district, ask priests and immigration advocates to go to the station - essentially, do everything in her power to help. And so she did.

There is little doubt that even after retirement Vega will continue to advocate and fight for the immigrant and Latino community of Philadelphia. I am going to miss her, though, and so are many other people who are part of the Latino community or engaged in building it and advocating for it. I'm attaching some videos I shot yesterday at her retirement party. (In English here and here; in Spanish here.) They paint the portrait of a woman with dozens of wonderful qualities - and still don't manage to capture the full measure of who she is and the impact she's had. 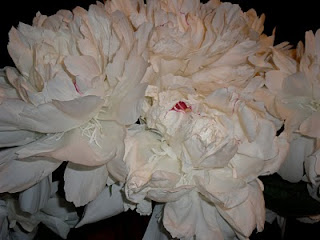 Here is how my mother told it: When she and my father arrived in Bangkok, Thailand, they instantly fell in love with the country. And they made friends -- Joann and Reeve (Hank) Hankins, and Mary Beth and Richard (Dick) Conlin -- who would go on to be their best friends for the rest of their lives. Early on they merged portions of each surname and came up with a collective noun for the three families: havoc. Great word, poor description.

Every two years -- long after the Conlins had moved to California and the Vourvouliad had moved to Guatemala -- the families continued to get together. The six parents were all aunts and uncles, and the second-gen havocs knew one another better, in some cases, than we knew our blood cousins. After one memorable “home leave” spent tooling around the American Southwest, the six adult havocs considered building three interconnected homes (the compound laid out in the shape of a turtle, if I recall properly) in Sedona, Ariz.

All kids have their favorites and mine were Aunt Joann (who convinced me Sarah Lawrence College turned out the best combination of funny and smart) and Uncle Dick. Here, let me give you part of the picture: He introduced me to the poetry of Gerard Manley Hopkins; was an enthusiastic participant when coerced into joining role-playing-games; and had once been in a genuine, storied Chinese opium den.

Conversation was never better than when Uncle Dick was around. He was a superb storyteller and could speak with authority on nearly any topic. Even in middle of a bridge or cribbage game. Maybe especially then.

Tonight, after finding out that he died, my daughter sat with me for a while. I noticed her watching me closely. She has seen me through the death of my parents, and she knows that I never quite manage to finish saying goodbye to people who own a piece of my heart. Uncle Dick was the last of the original havoc bunch and so his passing is doubly sad for me. I miss my parents and my “uncles” and “aunts” whose lives were rich with mutual love and zest for life. But, so long as we live, they too shall live. They are a part of us. And we remember.

May the choirs of angels

come to greet you.

May they lead you into paradise.

May the Lord enfold you

May you have eternal life.

This is not an empty bowl 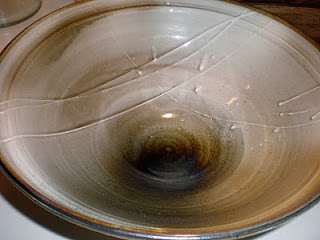 First, an apology. Looking all the way back to the year I started this blog, I've never had a month like this August - one post only, and a guest blog post at that. What can I say? It's been a tremendously busy summer at work (new bishops, departing bishops and as those of you who subscribe to the CS&T will see on Thursday, a big and gorgeous special supplement marking our cardinal's 25th year as a bishop). But, you'll be delighted to know, I'm not going to make up for lost time (days, weeks, month) all in one post.

my post title and image of the bowl. And, yes, I will be directing you to an article with some surreal elements to it. Slate (which, I have to say, I often love reading) is publishing a series of articles about economic inequality in the United States. If that sounds like a snooze, think again. Here are a couple of snips from Timothy Noah's second installment, guaranteed to raise some hairs:

"All my life I've heard Latin America described as a failed society (or collection of failed societies) because of its grotesque maldistribution of wealth [...] But according to the Central Intelligence Agency (whose patriotism I hesitate to question), income distribution in the United States is more unequal than in Guyana, Nicaragua, and Venezuela, and roughly on par with Uruguay, Argentina, and Ecuador. Income inequality is actually declining in Latin America even as it continues to increase in the United States."

One of the intriguing things about the whole article (click here to read it) is that you can enter your zip code and your income and see where you fall in the spectrum of things. I fall below the 50th percentile in mine. The first thing that came to mind when I saw this was: I've never fallen in the 50th percentile in anything - not even math (which, let me say, given my nonexistent math skills is scary in itself). The second was: wow, half the people around me are struggling even more than I am. It is a reality check and an incentive to move away from the pity party I've been throwing myself since - oh, forever.

But it is also an impetus to look to our safety net providers (Catholic Social Services, Catholic Human Services, Catholic Campaign for Human Development, Catholic Charities, or one of my favorites, Operation Rice Bowl) and realize that without them (and the equivalent organizations in other faiths) even more people would be facing that empty bowl that says it is not empty.

But income inequality does more than starve the body, it starves our dreams as well.

More about that in my next post.
Posted by Unknown at 6:51 AM No comments: